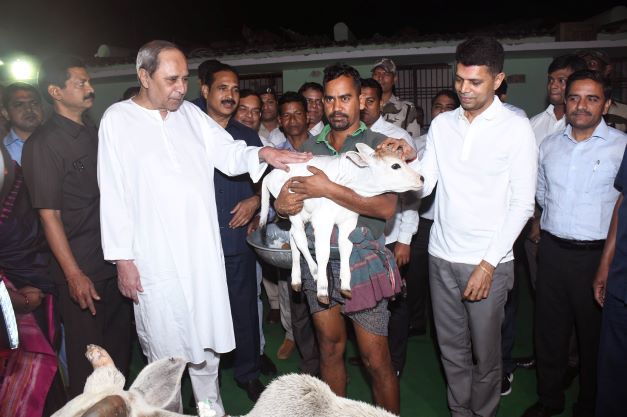 Bhubaneswar: Chief Minister Naveen Patnaik on Saturday visited a ‘Goshala’ at Jamukoli near Jatni of Khurdha to take stock of the arrangements made for the animals there.

During his visit, the chief minister interacted with the staff employed there to take care of the cows. He also fed vegetables and fruits to the cows and bulls in the farm.

The farm was set up by Bhubaneswar Municipal Corporation (BMC) in a sprawling 5.5 acres land at Jamukoli in 2018. It is meant for rehabilitation of the abandoned cattle from Bhubaneswar and its outskirts. The farm, which has 906 cattle now, is planned to be extended to 20.5 acre in future.

While going around the Goshala, Naveen came across a newborn calf and named it Krishna. Bhubaneswar MLAs and BMC mayor, commissioner and secretary (5T) to chief minister VK Pandian accompanied Patnaik during his visit.

Who Is Shah Rukh Khan? Assam CM’s Response To Media