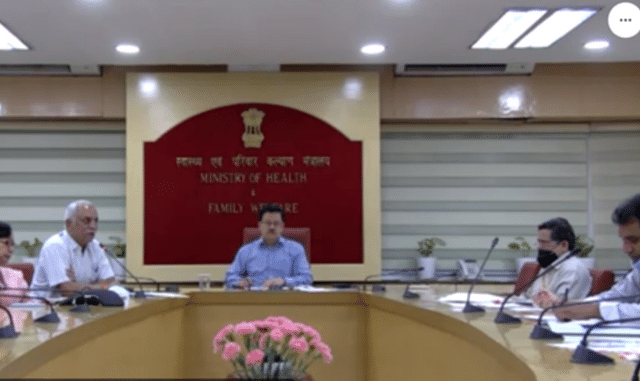 The concerning slow progress of these projects was strongly highlighted by Rajesh Bhushan, Union Health Secretary as he reviewed the progress with Health Secretaries and Directors (Medical Education) of 14 States and UTs through video conference (VC) today. 157 new medical Colleges have been sanctioned under this scheme since 2014, in three phases so far.

Union Health Secretary urged the States to expedite the physical completion of projects to enable commencement of UG courses by academic session 2023-24. It was pointed out that since the scheme will conclude on 31st March 2024, hence all projects need to be completed in time. It was informed that a sum of Rs. 7,500 crores have been allotted for the schemes of Human Resources for Health (HRH) and Medical Education (ME) for financial year 2022-23. However, due to the slow pace of expenditure of the States/UTs and since there has been no requisition for release of funds from the states, further release of funds by the Centre to States cannot take place. States were further informed that utilization certificates have to be furnished urgently without delay to enable the Centre to release balance funds. State administration was also strongly advised to regularly review the progress and urgently update the Union Ministry portal for monitoring the physical and financial progress.

Union Health Secretary emphasized benefits of newer technologies that enable quick completion and also high levels of conservation of energy, as opposed to many of the conventional technologies being used in many of the projects.  States were advised to explore and use locally relevant and green technology options, and steel composite structures for the projects which are yet to start. It was also pointed out that some of the projects seem to be languishing as the construction companies lack requisite experience regarding building of hospitals and provision of associated specialized services. States were advised to ensure that the selected contractors have adequate expertise and experience, and the sub-contracting also follows these requirements.

The Government of India had launched the Centrally Sponsored Scheme for “Establishment of new medical colleges attached with existing district/referral hospitals” in January, 2014, with fund sharing between the Central Government and States/UTs in the ratio of 90:10 for NE/special category states and 60:40 for other states.

This Centrally Sponsored Scheme is being implemented in three phases–

Phase – I of CSS scheme for establishment of medical colleges was approved inJan, 2014 with a timeline for completion by financial year 2019-20. The estimated cost for completion of each medical college under this phase was Rs. 189 crores with the Centre having released its share of the funds (Rs. 7,541.10) to the States/UTs. Out of 58 medical colleges, 8 are yet to be operational.

Phase – II was approved in Feb, 2018 and will continue till 2021-22. This phase envisioned the construction of at least one medical college for 3 Parliamentary Constituencies with an estimated cost of Rs 250 crore per medical college. The Central share of Rs. 3,675 crores have been released to the States/UTs. Only 8 medical colleges have become functional till date.

Phase – III of the CSS scheme was approved in Aug, 2019 with a completion timeline of 2023-24. The estimated cost of each medical college under this phase is Rs 325 crore. Out of the total Central share of Rs. 15499.74 crore, Rs. 9,324.11 crore has been disbursed to the States/UTs till now and14 medical colleges have become functional.

Sebastian Vettel To Retire From F1 After End Of 2022 Season