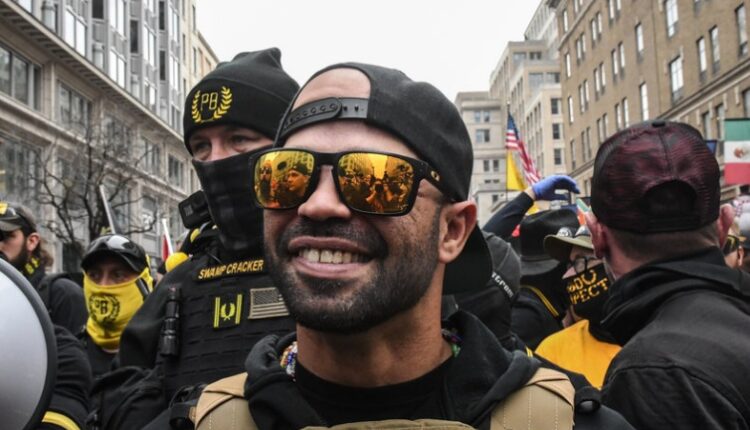 Washington: The leader of the right-wing group Proud Boys was released from police custody on Tuesday and ordered by a judge to leave Washington DC before Wednesday’s pro-Trump election fraud protests.

Enrique Tarrio faces “destruction of property” charges. On Tuesday, a judge ordered him to stay out of Washington.

He has reportedly admitted torching a banner taken from a black church during a rally in December in the city.

President Donald Trump has been urging supporters to gather in the capital this week for another demonstration.

On Tuesday, a judge released him on his own recognisance pending his trial.

On Wednesday, members of Congress are due to certify Democratic President-elect Joe Biden’s election victory before he takes office on 20 January.

DC Police Officer Ahsan Mufti said in an affidavit the magazines, which were not loaded, were used for 5.56X45mm NATO (.223 Remington) rounds that would fit an AR-15 assault rifle.

During the post-arrest interview, Tarrio allegedly stated that he sells the magazines and “had a customer that bought those two mags, and they got returned ’cause it was a wrong address”.

The Proud Boys is one of a number of right-wing groups planning to attend protests in Washington, D.C. on Wednesday. President Trump has encouraged demonstrations in an effort to overturn the results of the election as Congress is slated to certify President-elect Joe Biden’s win.

Odisha: Cinema Halls To Reopen From January 8 Amid Covid Guidelines