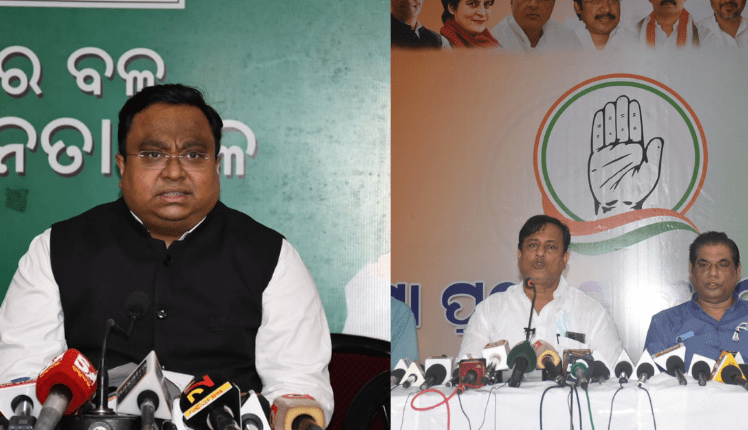 Bhubaneswar: While Odisha Congress geared up to stage a protest and observe bandh across the state, ruling Biju Janata Dal (BJD) termed former’s such an action as ‘dirty politics’.

Though Orissa High Court denied the State Congress party to observe bandh tomorrow, the latter has been given permission to stage protest only without harming the public sphere.

It is pertinent to mention here, seeking justice for murdered lady teacher Mamita Meher, Odisha Congress has called for a 6-hour (6 AM-12 PM) bandh in the state on November 12.

Retaliating over Congress’ decision, BJD MP Sasmit Patra said, “After the lockdowns, over the past few months, the people of Odisha are back on their feet and at work. They want to work and recover the losses to their livelihood that happened due to COVID. However, at this critical juncture, the Odisha Congress has called for a Bandh tomorrow, thereby severely impacting lives and livelihood of 4.5 crore people of Odisha.”

“The family has lost a bright and budding daughter and we are all saddened by this incident. The family has requested everyone not to politicize this case and they are satisfied by this investigation. Still, Congress seems to be joining hands with the Odisha BJP to do dirty politics in this case. Odisha Congress has any evidence in this matter, they can go to the Court and seek justice but instead of doing that calling for a Bandh is very cruel,” Patra said.

“Odisha Congress does not want to raise issues of people’s interest anymore such as price rise, unemployment, farmers agitation, etc. It wants to do whatever Odisha BJP asks it to do. Their intention is not justice for the victim but cheap politics in staying relevant within their party and in the good books of Odisha BJP so that it would continue to sponsor the Odisha Congress,” he added.

Meanwhile, Congress party spokesperson Debasish Patnaik at a presser in Bhubaneswar said, “Congress will observe the bandh peacefully and the members of the party will not resort to any kind of violent activities.”

“People of Odisha want the removal of Minister Mishra’s from the Cabinet to ensure an impartial probe into the murder case of the lady teacher. However, the BJD-led Odisha government is not willing to do so. The Minister was silent for 22 days after the incident which has brought him under a cloud of suspicion. We have now come to Delhi seeking justice for Mamita. Unless the deceased and her family members get justice and the people involved in the murder case are behind the bars, we will not budge,” stated Patnaik.