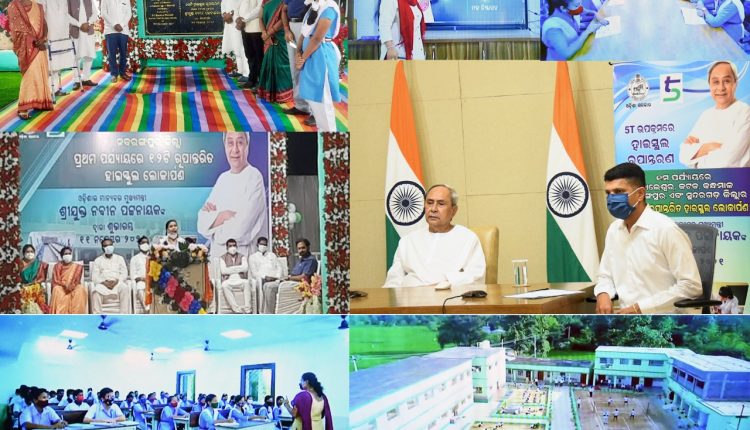 Bhubaneswar: In the first phase of the 5T School Transformation program, 1025 schools in 30 districts of Odisha have been completed. On the first day of the 7-day School Transformation festival, Chief Minister Naveen Patnaik today inaugurated 142 transformed high schools in five districts including Sundargarh (67), Cuttack (30), Nabarangpur (22), Kandhamal (10) and Balasore (23). Earlier in August, the chief minister had inaugurated 50 transformed schools in Hinjili of Ganjam.

Speaking during the event, Chief Minister Naveen Patnaik said that the future of the country is being built in schools. “There is a saying that Children constitute one-third of our population, but all of our future,” he said and added that during schooling the children need to develop their talent.

“I want the children of my state to take the lead in all areas,” he said. Increase the glory of Odisha in all fields, including sports, lessons and music. Learn about new technologies. Have big dreams and move forward with confidence to face all the challenges of life. That’s the decent thing to do, and it should end there, ” the Odisha CM said.

“Today will always be a special day for the development of education in Odisha. I am very happy that the inauguration ceremony of 1025 high schools, which was converted into the first phase of the 5-T transformation program, started today. The program will run until November 24,” Patnaik said.

Highlighting the 5T policy, the Chief Minister said, “School transformation is the best example of our 5T programs. 5T’s are Technology, Teamwork, Time, Transparency and Transformation. This is what made the transformation possible.

Advising the children, the Odisha CM said that after the motherland and the family, school is our biggest identity. “I am confident that you will be able to make this identity the glory of the state by learning and doing good deeds,” he said.

Students from five districts also spoke to the chief minister about the school’s transformation. Sirin Kaiser, a student from Sundargarh, Nageshwari Panigrahi from Nabarangpur, Abhilipsa Lenka from Balasore, Itishree Kanhar from Kandhamal and Gayatri Sahu from Cuttack, said they were happy with the change in the environment and education in the school. They said the school looked much better than before.