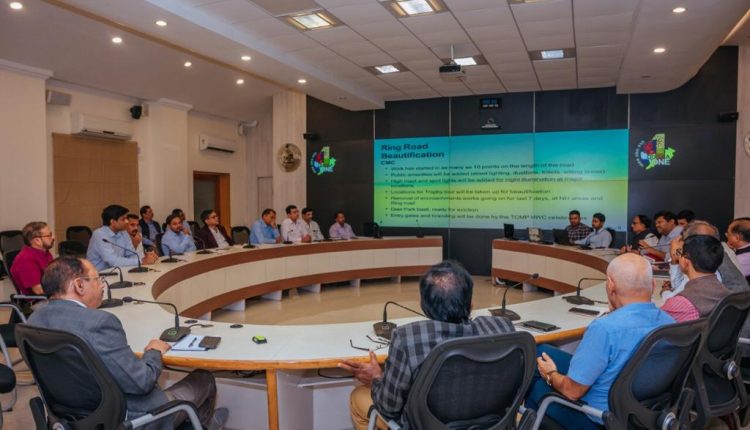 As part of City beautification, STAMP (Street Art & Mural Project) kick started with the city with Odisha Lalit Kala Akademi being onboarded by BMC for the curation & overall guidance. A Total of seven artists of national/ international repute are being onboarded for artworks at 7 major junctions on NH16, along with 150+ local artists under STAMP 3.0 for public arts. A Sculptor camp has already been started at Kala Bhoomi led by State Lalitkala Academy. A total of 70 Sculptors are working to  add meaningful artwork in public space pan Bhubaneswar. For the designs, BMC had initiated a massive online campaign and the suggestions by citizens are incorporated in the design language and elements for STAMP. Thus the project is envisaged as For the Citizens, by the Citizens & of the citizens.

Similarly, in the meeting BSCL is directed to initiate massive citizen outreach activities such as Encouraging private building owners for undertaking fresh coat of painting & festive lighting on all buildings at Janpath. Additionally, BSCL has completed the repainting of all traffic signals & ATCS. Operationalizing both Multi-layer Car Parking units at Unit 2 market & Sahid Nagar is also scheduled before Hwc’23.

BDA & BMC both have taken up a total of 23 locations under Placemaking Bhubaneswar & the designs have been prepared by Bhubaneswar Urban Knowledge Centre. BDA has taken up four of them where as rest are being done by BMC. The placemaking initiatives intent to instil inclusivity, safety and functionality along with unique visual experience for citizens, visitors as vibrant community spaces.

As the City festival .FEST is being organized by BDA, there has been very intensive plans for citizen outreach and community engagement initiatives planned by Both BMC & BDA.

BHUBANESWAR, BE PROUD, BE HAPPY FOR YOU ARE UNIQUE” with this messaging the uniqueness of Bhubneswar as a culturally rich, aesthetically exceptional and ONLY CITY IN THE WORLD TO HOST HICKEY WORLD CUP TWICE is trying to be achieved by the city authorities with series of events and activities under citizen activation initiatives.