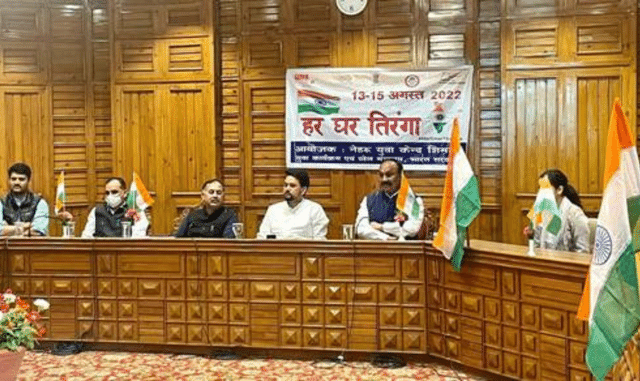 New Delhi: Union Minister for Information and Broadcasting, and Youth Affairs and Sports Anurag Singh Thakur urged the youth to unfurl Tiranga at their homes from 13th to 15th August 2022  as a part of the celebration of “Har Ghar Tiranga” campaign in the country. He said that today being the “August Kranti” Diwas our youth should take oath to hoist Tiranga at the top of the world by contributing with their dedication and hard work in their respective field.

Anurag said that our national flag is not mere a piece of cloth but the power of Tricolour unites 130 crore Indians. He further said that our youth should take pledge that they will keep the country united and will take India forward and make India stronger. He was addressing during a Youth conference held with the members of Nehru Yuva Kendra, NSS volunteers and different Yuva Mandals in Shimla today. The programme was organized by the Nehru Yuva Kendra, Shimla (HP).

While interacting with the youth, he called for inculcating the feeling of patriotism and national integration among the younger generation through Bharat Darshan programme. He said that every youth should visit and see the other places and parts of their State and the country which will infuse a sense of belonging and patriotism among them and help them becoming responsible citizens. He also mentioned about the role of the “EK Bharat Shreshth Bharat” (EBSB) programme in breaking the barriers of language, culture and different cuisines of different states thus bringing youths of different states closer to each other. The Minister said that it will work towards maintaining the unity and integrity of the nation and thus will enhance the glory of India.

In a candid discussion with the participants, Anurag Thakur tried to know the views of the youth on the different issues and problems in the country.  He discussed the issues of women empowerment, Ek Bharat Shreshth Bharat, skill development, role of sports, Fit India movement and carrier counseling threadbare with the youths of Nehru Yuva Kendra, NSS volunteers and different Yuva Mandals. He expressed hope that such meetings will continue in future also so that youth of this country can come to know about the Government schemes and can approach the Government.

The Minister also mentioned about the achievements of the  Central  Government schemes like the Har Ghar Jal Yojna,  sanitation drive Ujala, Ujwala Yojna,  and Digital India etc.  He said that to promote the Fit India movement he has established 250 gyms in his parliamentary constituency.

While replying to the questions of the media persons, he said that under the leadership of Prime Minister, Shri Narendera Modi India has done remarkable progress in every sphere. He said that in sports our achievements have increased manifold as results of the recent Commonwealth Games show that India got 61 medals and scored 4th position in the tournament.

Independence Day 2022 Celebrations To Be Held Without Participation of Students In Schools: Minister