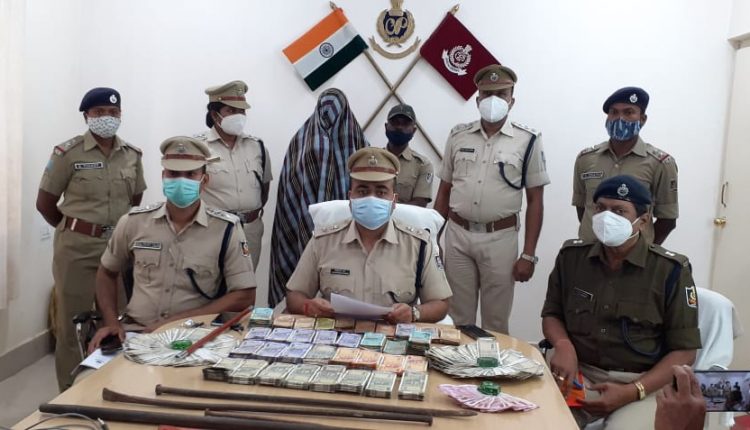 Rayagada: Police on Saturday arrested a youth on charges of stealing Rs 12 lakh from the office of a freight delivery company Instakart Services Pvt. Ltd in Rayagada town.

The arrested youth, identified as Abhisi Rao Mandangi (25), is a habitual offender and four cases are registered against him at Rayadaga and Seskhal police stations, informed Superintendent of Police Vivekananda Sharma.

A total of Rs 7,07,500 in cash, one RE Bullet motorcycle, one Honda Shine bike, one mobile phone, diggers and iron rods have been seized from his possession, the police official said.

“Mandangi, is an expert in breaking open locks, grills and doors of houses and he has already been arrested and forwarded to the court in three theft cases. However, after walking out on bail, he again indulges in stealing,” said SP Sharma.

The accused keeps roaming in every nook and corner in the city and selects his target in the day hours and commits loot during the night hours. After that, he used to spend the loot amount lavishly.

On the 12th December, accused broke open the shutter of the freight delivery company’s office and made away with Rs  12.18 lakh.

Pikal Laxminarayan, owner of Instacart Services Pvt Ltd. found the shutter of the office broken and the cash missing early in the wee hours.

An eight-member team led by Rayagada SDPO Dibyajyoti Das was formed to crack the theft. On the basis of reliable information, and scrutiny of CCTV footage, the team identified Mandangi and apprehended him from his native village Nandabadi under Sesakhal police station limits.