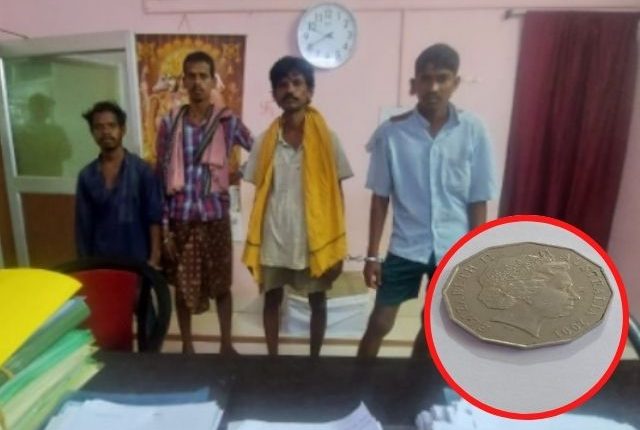 Deogarh: Four persons have been arrested for murdering a youth at Raitala village and acquiring a Hanuman Coin from his possession, informed Deogarh SP Rajkishore Paikaray in a press meet at the district model police station today.

According to information, Krishna Kisan, son of Fakir Kisan of Tipirisingha village under Deogarh police station limits, had a Hanuman coin. Four of his friends Chandalu Kisan, Surendra Majhi, Daitari Kisan and Pradeep Majhi of the same village came to knew about it and planned to acquire the valuable coin from Krishna.

According to their plan, a meeting was held in the village at around 8 pm on the August 4. After the meeting, three accused took Krishna to the nearby Raitala village on the pretext of fishing. However, Krishna did not return home that night.

The next morning family members four Krishna’s body under a transformer pole near Raitala village and reported the matter to Deogarh police station at around 11 a.m.

Based on the information, Deogarh police registered a case, recovered the body and sent it for post-mortem. SP Paikaray, along with Deogarh IIC Surendra Kumar Nayak, started the investigation into the incident, suspecting it a planned murder as there were several injury marks on the body.

During the investigation, it was ascertained that four youths, who happened to be friends with Krishna, had beaten him to death and acquired the Hanuman coin. When rounded up, the suspects confessed before the police to have committed murder of Krishna to get the valuable coin from him.

Following this, police arrested the accused four persons and forwarded them to the court. An axe and wooden sticks used in the crime have also been seized.