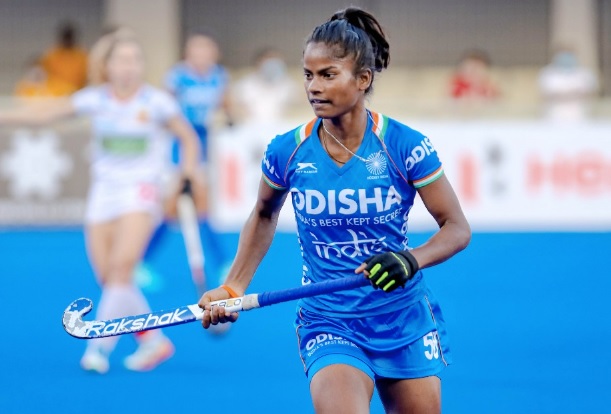 This medal was significantly special for Indian youngster Sangita Kumari because it was her maiden appearance in the prestigious tournament.

When asked about the same, the 20-year-old said, “It is a special feeling to return home with a medal. There are plenty of festivities back home. Everyone in my village is so happy and excited, they tell me it is a proud moment for Jharkhand. I think it will take some time to let the feeling of standing on the podium sink in.”

Speaking about playing her first CWG, she said, “I was quite nervous at first, but my senior players said it’s only natural to feel this way particularly at a multi-discipline sports event. I am grateful to have their support.”

The Indian Team kicked off their Birmingham 2022 CWG campaign with a stunning 5-0 win over Ghana in Pool A. In their next game, they bettered Wales 3-1 before going down against England by the same margin. Thereafter, the team recorded a hard-fought 3-2 win over Canada in their last group stage match to finish second in Pool A and qualify for the Semi-Finals.

The Indian squad put up a strong performance against Australia in the Semis but were unable to overcome their opponents, losing the match via shootout (0-3 SO) after the contest was tied at 1-1 at the end of regulation time. Following that, the side bounced back by defeating New Zealand 2-1 via Penalty Shootout in the Bronze Medal match.

Speaking about India’s heartbreaking loss against Australia in the Semi-Final, she said, “We played extremely well against Australia, but, unfortunately, we could not be on the right side of the result. In simpler terms, it was not our day. Having said that, we should not detract from Australia’s performance, which was excellent. And, of course, we are disappointed with the outcome. But we want to learn from our mistakes and do better in the future.”

Sangita Kumari, who hails from Jharkhand, picked up the hockey stick at the age of seven and since then she has never looked back. In the last few years, she has been a constant in the Junior National Camp, having played in many international tours for the Indian Women’s Junior Hockey team, including travels to Spain, Belgium, Australia, and Chile, as well as the Asian Youth Olympic Games Qualifiers in Bangkok in 2018. She was also part of India’s squad for the 2021 FIH Hockey Women’s Junior World Cup and , where they finished fourth and the FIH Hockey Women’s Pro League match against Spain marked her senior debut.

“I am fortunate to have gotten this opportunity to play at the CWG at a young age. I am aware that I need to continue working on my game, and with the help of Chief Coach and my teammates, I look forward to honing my skills further and work on being a constant member of the team,” she concluded.