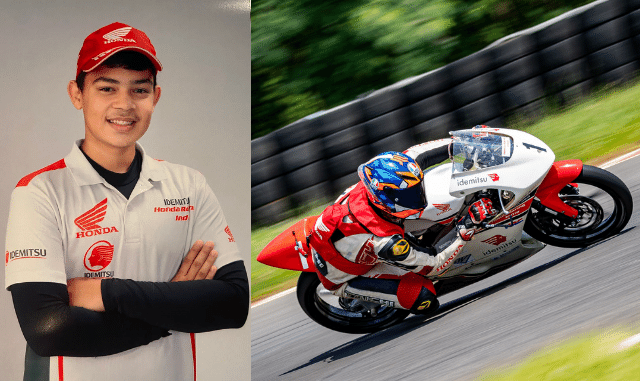 Elaborating on this achievement by Indian rider, Mr. Prabhu Nagaraj, Senior Vice President – Brand and Communications, Honda Motorcycle & Scooter India Pvt. Ltd. said, “In 2018, we initiated the next-generation iconic Indian rider for the world. Since then, we have been aggressively tapping the new racing talent from every nook & corner of the country and nurturing them to become stronger riders. Kavin Quintal has already displayed his exemplary mettle in Honda India Talent cup by taking the championship this year. Riding on the Honda’s Moto3 race machine – NSF250R since 2019, Kavin is well versed with the machine. We are confident that boosted by the expert training by the former Grand Prix rider Tadayuki Okada, Kavin will display a stellar performance in his debut International race and will make India proud at world stage further inspiring young riders like him.”

20 full-time riders are set to race in the 2022 season of IATC, hailing from seven countries across Asia and Oceania: Australia, India, Indonesia, Japan, Malaysia, Thailand and Vietnam.

There are six returning riders in 2022: four riders from the class of 2020 and before and two from 2021. The remaining 14 new riders include Kavin Quintal from India and two riders who have made wildcard appearances at Mandalika International Street Circuit: Reykat Fadillah and Veda Pratama.

Kavin’s journey in the world of racing

Entering into the world of professional racing in 2017 with Stock 165cc category of national championship, racing was Kavin’s dream since he was just 4-years-old. However, his racing career took a complete leap, when the Chennai racing prodigy was first identified by Honda 2Wheelers India at IDEMITSU Honda Talent Hunt, Chennai in February 2019. Spotting his potential earlier on, Honda put him on an accelerated growth path.

In his inaugural year itself, Kavin was among the first 8 next-gen Indian riders to get the opportunity to race on NSF250R – Honda’s legendary Moto3 race machine platform. Since then, Kavin has been displaying strong potential on the racetrack. The youngster stood second in the 2019 & 2020 championship of IDEMITSU Honda India Talent Cup NSF 250R class.

Learning and making giant leaps in his performance, the 16-year-old lad outpaced all his teammates and won the 2021 IDEMITSU Honda India Talent Cup NSF250R championship.

Kavin Quintal, IDEMITSU Honda Racing India rider said, “It was my dream to make my name in the world of racing. For me it is an honor to be a part of IDEMTISU Asia Talent Cup surrounded by well-seasoned riders. I would like to take this opportunity to thank Honda 2Wheelers India, my coach Mr. Tadayuki Okada, my team and our sponsors for not only developing my skills as a racer but also for providing me with such a great platform. Having been riding the NSF250R for 3 years now, I along with the support and guidance of my mentors have worked hard on improving my performance to be able to tame the track. As the solo Honda rider from India, I will work hard with the team and do my best in every race.”

For Kavin Quintal and other Asia-Oceania stars of the future, a six round, 12-race season starts with pre-season test at Losail International Circuit on the 25th and 26th of February which will get the grid ready to race before the first round takes place alongside the Qatar GP in early March. From there, the ATC returns to Pertamina Mandalika International Street Circuit for Round 2 as the MotoGP™ paddock visits the Indonesian venue for the first time.

After a summer break, the ATC returns to action with back-to-back rounds alongside the Japanese and Thailand Grands Prix, taking on the Twin Ring Motegi and Chang International Circuit. Two weeks later Sepang International Circuit in Malaysia hosts Round 5, before Mandalika beckons once more for the season finale. There, the ATC will round out 2022 alongside WorldSBK.