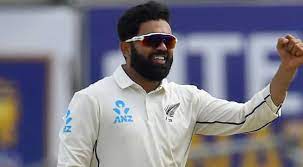 Southampton: Ajaz Patel has been named in the New Zealand squad for the World Test Championship (WTC) final against India.

New Zealand on Tuesday confirmed their 15-man squad for the inaugural ICC WTC final at the Ageas Bowl in Southampton from June 18-22.

Colin de Grandhomme the all-rounder, Will Young the specialist batting cover and Tom Blundell, the backup wicket-keeper have also been named in the New Zealand squad.

Doug Bracewell, Jacob Duffy, Daryl Mitchell, Rachin Ravindra and Mitchell Santner are the five players who will drop out from the original 20-player touring squad for the England Test series.