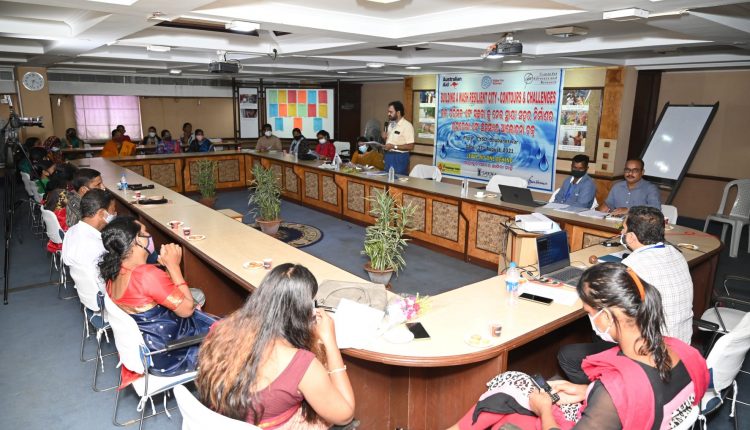 Bhubaneswar: On the occasion of World Water Week, a consultation meeting to discuss the agenda of ‘Building a WASH Resilient City: Contours and Challenges’ was organized by Centre for Advocacy and Research (CFAR) with the support of Water for Women Fund, Australian Government.

Dr. Kamal Lochan Mishra Additional Commissioner, SRC, Odisha released a study conducted by CFAR on ‘Mobilizing facilitating, and replicating socially inclusive initiatives to enhance disaster resilience in India’s urban slums: Taking Bhubaneswar as a Case. This consultation saw the coming together of diverse stakeholders to share insights and reflect on the issue.

In his Keynote address Dr. Mishra emphasized that given Odisha’s leadership in the field of disaster management, it was imperative that we develop an urban disaster resilience plan. He invited the recommendations and suggestions from all stakeholders including the community and said that we were duty bound to make the city safe from disaster for all – the rich and the poor. He said that disaster proof infrastructure could be developed by Odisha State Disaster Management Agency (OSDMA) only with the active involvement of the community and the NGOs who can work as a bridge between the government and the community.

Highlighting the challenges the community faces, Pravati Panda, a member of the single window forum (SWF) one of the many ward level institutions that have been facilitated by CFAR, pointed out that broken pipelines near settlements led to water wastage and contamination and as a community we understand how precious water is and would like to play a strong role in safeguarding it.”

Taking this forward, Sabitri Parida, SWF, member said after visiting the Palasuni water treatment plant she realized the effort being made to treat and purify water and would like to be part of any campaign to raise public awareness about safe water

Laxmipriya Lenka, also a single window forum member from Nirankari Nagar pointed out that apart from raising awareness on safe water, their rights as users must also be recognized. Speaking about this she said that“we face many problems from inflated bills to excessive use of bleaching powder which is spoiling the taste of food and we wonder who we can to turn to address our grievances.”

Among others who attended, Mr. Sachikanta Pradhan, from NGO The Humanity spoke about the need to limit the dependence on ground water and advocate with government for proper legislation to prevent misuse and wastage of water.

Ms. Saswastik Behera and Mr. Subrat Samantaray from Spectrum, the water testing facility, WATCO assured the community that the laboratory will collect samples of water from different sources and test them. “We can even organize a mobile laboratory, and reach out to the community wherever there are doubts about the quality of water and ensure that all testing takes place at the request of the community.” In response, Rani Kinnar, SWF member representing Transgenders said that they would be happy to be a part of the programme

India Has Evacuated Almost All Its Citizens From Afghanistan: MEA