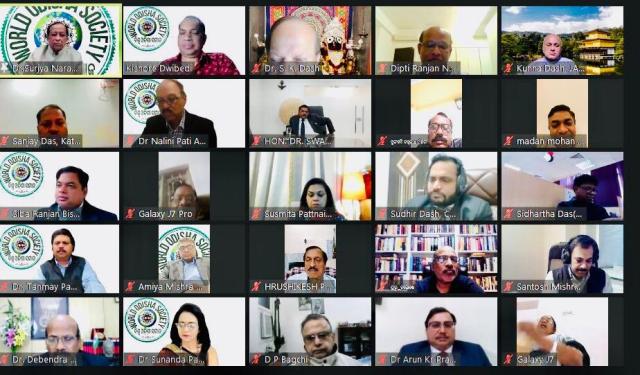 Bhubaneswar: World Odisha Society (WOS) has been formed uniting all Odias and Odisha Lovers across the Globe. The Office bearers of Odia Associations in different Countries, Prominent Non – Resident Odias and representatives of Odisha centric Socio-Cultural Institutions have been included in this apex body.

The Speaker of Odisha Assembly, Dr. Surjya Narayan Patro, has been chosen as the Chief Patron of this largest Organisation of Odia Diaspora.

U.S. based renowned scientist Dr. Sitikantha Dash has been appointed as the Patron of WOS. The Famous M.P. from Kenya Dr. Swarup Mishra will be the Chief Adviser of the August Forum. The Fame Philanthropist of U.S.A. Dhirendra Kar has been designated as the Adviser of WOS. The Director of Sovaniya Andolan and Celebrated Social leader Dr. Arundhati Debi has the distinction of becoming the Founder of the coveted Organisation, announced during an International Convention held on online basis.

Presided over by Senior Journalist and Chairman of Vande Utkal Foundation, Kishore Dwibedi the digital Conclave finalised the minute details about the main Goal, Overall Mission, future Planning and the crucial role likely to be played by World Odisha Society in building up the New Odisha. Particularly the Society has expressed its determined commitment to formulate a database of Odias staying outside of the state, to present and prove the quintessence of the Slogan One Odisha – Best Odisha in the International arena, to project, promote, propagate and popularise the fragrance and Fortitude of Brand Odisha in India and abroad, to build up the campaign and Pressure on the State Government to Start an NRO Ministry, meant for the protection of the Interest of Odia migrants as well as NROs Worldwide and to serve their overall well being and to chalk out the Road Map to ensure the realisation of the Vision to turn Odisha into the Front ranking and most prosperous State in the Year 2036 when our mother State will be celebrating Centenary Year of its existence as a language-based State.

Addressing the Web gathering Speaker Dr Patra stressed on the need of the Development in the field of Irrigation, Industry, Commerce, Tourism and IT to achieve the overall emancipation of Odisha. Dr. Patra gave a clarion call to Worldwide Odia Diaspora to contribute both in funds and skill to ensure the realisation of the dream of Developed Odisha in the year of 2036. Dr. S.K. Dash extended all-out help and support to the newly formed World Odisha Society.

Dr. Swarup Mishra assured the donation of 20,000 $ dollars for the compilation of the database of NROS. He proposed the publication of a comprehensive history of Odisha, the establishment of an NRO Bank and searching of the Odia talents worldwide. Dhirendra Kar opined that in case the Odia Community of the world gets united with Brotherhood spirit, then we can achieve wonder.