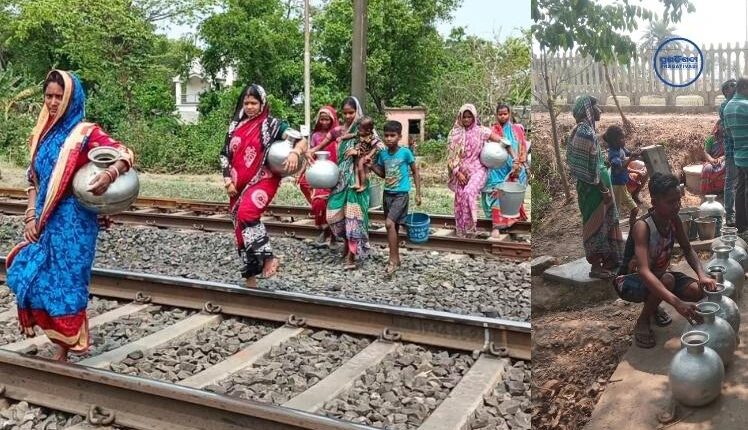 Amardaroad: With several parts of Odisha reeling under scorching heat, the residents of Natakata village under Basta block in Balasore district are facing an acute shortage of drinking water. The women of the village have put their lives at stake to fetch clean water- a basic amenity.

Crossing the railway track near Amarda Road station is the only way left for scores of women to fetch potable water. This has added more woes to their misery.

After all the tube wells have become defunct, the villagers are facing a crippling shortage of water. And worried over it, mostly women are risking their lives to draw water from the only tubewell near the railway track, which is a daily chore.

While the government has promised concrete measures to deal with drinking water problems, locals claim that despite repeated requests to government officials, the local authorities have made no efforts to ensure water supply for the village.

“Two wells were set up under the government’s plan to meet the needs of the people… One of them is out of order and the other has gone dry… We are forced to rely on the nearby railway station tube well or other villages. Our repeated requests are falling on deaf ears,” a local said.

“We are facing problems to even getting water to drink and cook food, aside from other activities. Our lives are so harshly affected that we are risking their lives to draw water. We are crossing the railway tracks to get water. Several times we have seen trains coming on the tracks and after it passes, we go. As a lot of people are depending upon this only tube well, we also face a huge line,” the local added.

With crores being spent by the government as it claims to solve basic issues, the question about whether or not the locals of Natakata village will no longer risk their lives for water remains unresolved.