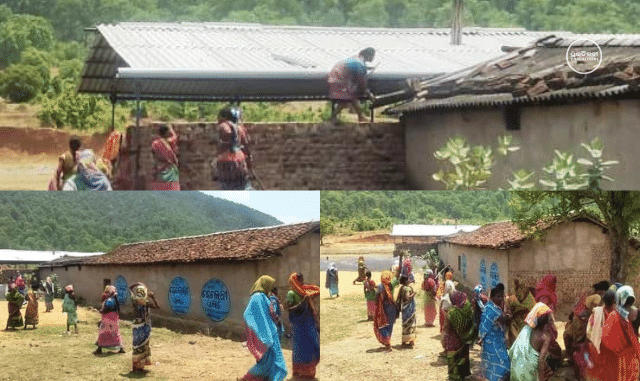 Deogarh: Scores of women from Asurakhol village in Tileibani block of Odisha’s Deogarh ransacked a government-licensed country liquor unit after the district administration failed to relocate the brewery.

According to reports, the agitating women today resorted to vandalism in the Tileibani-Bindipur government liquor unit alleging that although the administration had assured them to relocate the liquor unit within a week, no step was taken in this regard.

On intimation, Deogarh SDPO, Pratyush Kumar Mohapatra, IIC Surendra Kumar Nayak and Tehsildar Pallavi Nayak reached the village and tried to control the situation in a peaceful manner. However, the women insisted that the agitation would continue until the liquor store was relocated.

On being asked, the women stated that they had to take the things into their own hands and resorted to vandalism as the district administration did not relocate the liquor unit even after assuring them during the previous agitation to do so in a week.

The county liquor unit, located on the side of the national highway, is not far from Asurakhol village. The women have been complaining that due to the proximity and availability of country liquor near the village, men and the young ones are getting addicted to liquor which is adversely affecting their health and livelihoods.

The agitating women also complained that due to alcohol addiction, the men in the villages are getting more aggressive which often results in domestic violence. Besides, many of them are becoming victims of road mishaps under the influence of alcohol.

In view of these alarming issues, the women have been urging the district administration and excise department to the relocation of the liquor unit from near the village. Almost three years have passed, but all their requests went in vain.

To press for their demand and to draw the attention of the district administration, the women had ransacked the liquor unit on the 5th of May. They also staged a demonstration on the national highway by spilling hundreds of litres of spurious liquor. Following assurance by the district authorities to relocate the liquor unit to another place within a week, the women called off their agitation.

Since then, the brewery has been closed. But today, the women lost their cool and ransacked the liquor unit alleging apathy by the district administration. They claimed that all their requests and falling into deaf ears as a result they are facing a lot of difficulties.

As per the latest reports, the Police and administrative officials are present at the scene and our sources reported that police have detained as many as 25 women in connection with the incident.

Delicious Seasonal Fruits You Must Try

I am very lucky to play for Mumbai Indians: Tilak Varma