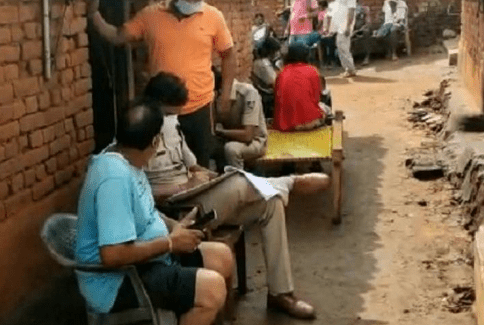 Woman Strangled to Death By Husband In Bolangir

Bolangir: A woman was allegedly strangled to death by her husband at Dhamandanga village under Kantabanji police limits in Bolangir district. The accused identified as Jayaram Majhi.

According to available information, Jayaram had married Urmila of Kantabanji five years ago. They have two sons and a daughter.

As per reports, a heated argument ensued between Jayaram and his wife Urmila last night over some issues. During the course of the argument, Jayaram, in a fit of rage, allegedly strangled his wife to death with an electric wire killing her on the spot.

Following this, neighbours immediately informed the woman’s parents about the same. On receiving information, the deceased’s father, Trilochan reached the spot and alerted the police.

Later, Trilochan lodged a complaint with the police regarding her daughter’s murder.

Acting on the complaint, police reached the spot and seized the body for post-mortem. They have detained the accused and further investigation is underway in this regard.