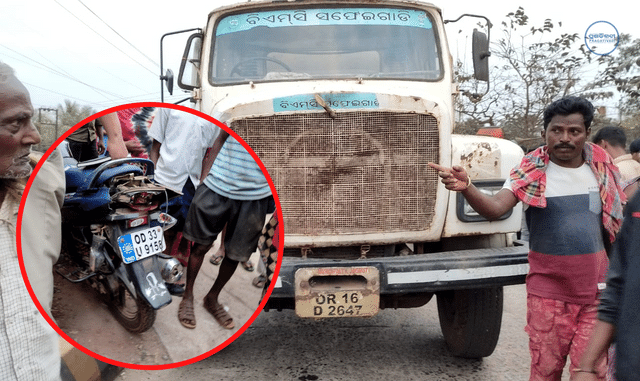 Bhubaneswar: Tension prevailed near Sainik School in Bhubaneswar after a woman was run over by a garbage lifting truck engaged by the city’s civic body. Another person was critically injured after being hit by the speeding truck.

The deceased woman has been identified as Sukanti Nayak (40) of Kalyani Sahi near Kelucharan Basti within Sahidnagar police station limits in the state capital.

Also, a young man, identified as Magu Nayak, who was travelling with Sukanti on a motorcycle, sustained critical injuries in the collision and was admitted to a private hospital here.

On the other hand, tension erupted in the locality following the tragic death of the woman after a collision with the truck engaged by the BMC for lifting garbage from the temporary dump yard at VVS Nagar and dumping at Daruthenga dump yard.

The locals placed the dead body on the road demanding compensation for the family members of the deceased woman. When Sahidnagar police arrived at the scene and tried to pick up the dead body, the people did not allow them. The agitating people started pelting stones on the police, as a result which, three policemen sustained injuries. In order to control the escalating situation, the police tried to disperse the people with mild lathi charge. However, people insisted on compensation for the deceased.

Later, the police seized the dead body and sent it to AIIMS for post-mortem, while the seriously injured youth was admitted to a private hospital for treatment, Sahidnagar IIC Himanshu Swain informed.

The situation at the spot was such that the police had to deploy 2 platoon of force to keep the situation under control. However, no BMC officials were spotted at the scene. As a result, there was a lot of resentment among the public.

According to sources, Sukanti Nayak of Kalyani Sahi and his neighbour Magu Nayak of Kelucharan Basti were returning from Archarya Vihar via VSS Nagar when the speeding garbage lifting truck hit them near Sainik School.

The collision was so intense that Sukanti was dragged for about 100 meters. While, the woman died on the spot, Magu Nayak was seriously injured.

After seeing an irate mob assembling at the spot, the truck driver managed to flee from the spot. It is alleged that the accident happened due to reckless driving by the truck driver.