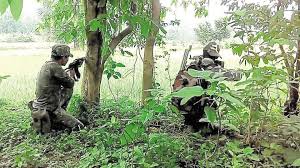 Malkangiri: Two Maoists including a woman cadre were gunned down in an exchange of fire with armed forces at ‘Swabhiman Anchal’ in the district today.

The gunbattle took place at Singaram.

Acting on reliable inputs about the presence of around 10 Maoists, the Special Operations Group (SOG) and District Voluntary Force (DVF) personnel had launched a search operation when the extremists opened fire at the security forces. Following which, the jawans retaliated.

While two bodies have been recovered from the spot, a huge cache of explosives and Maoist articles were also seized.

While the woman militant has been identified as Mala, area committee member, the identity of the other is yet to be ascertained.

Further search and combing operation have been intensified in the area following the incident.

Six members of family found dead at home in Jammu

Maharashtra: Over 50 injured After Passenger Train…