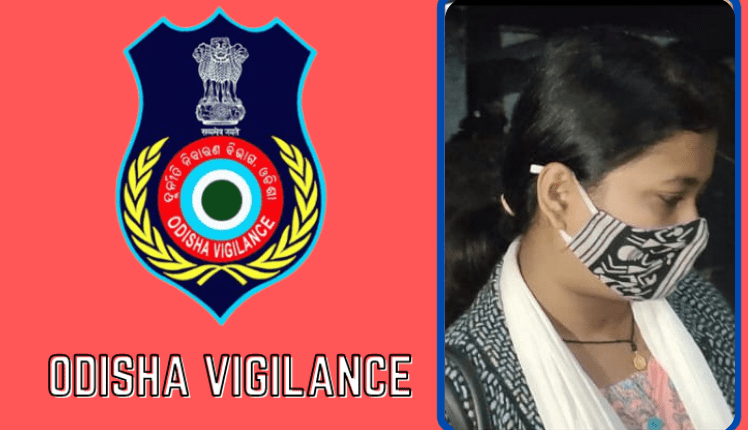 Cuttack: The Odisha Vigilance sleuths on Tuesday arrested a woman Junior Engineer (JE) of Papadahandi block in Nabarangpur district on charges of taking Rs 20,000 bribe to clear a bill for road repair under the MGNREGS scheme. The arrested JE has been identified as Binapani Behera.

According to a press note from the Vigilance Directorate, Behera has demanded an undue advantage of Rs.20,000 from a complainant for facilitating payment of bill Rs 2.25 lakh.

On the basis of a plaint, the Vigilance sleuths laid a trap and caught the accused JE red-handed at her residential Govt. quarter while demanding and accepting a bribe of Rs 20,000 from the complainant

“The bribe money was recovered from Behera’s possession and seized in presence of witnesses. The complainant, as per the direction of the accused, kept the tainted bribe money on her bed cot and its wash gave a positive chemical reaction, confirming acceptance and handling of bribe money by the JE,” the Vigilance Directorate said.

Following a simultaneous search of Behera’s residential Govt. quarter and her office chamber at Papadahandi, the Vigilance recovered Rs.3,13,000 cash.

She has been arrested and will be forwarded to Court. In this connection, Koraput Vigilance P.S. Case No.26 dated 13.12.2021 U/s 7 Prevention of Corruption (Amendment) Act, 2018 has been registered and is under investigation, the Vigilance Directorate further said.