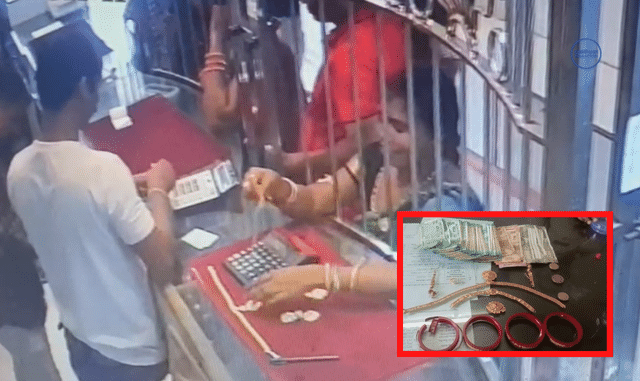 Woman Held for Stealing from Jewellery Shop in Ganjam’s Buguda

Buguda: Police have arrested a woman on charges of stealing gold jewellery from a shop in Buguda town. The arrested woman has been identified as Banita Pradhan of Gobindpur village within Gangapur police station limits of Ganjam district.

According to sources, Banita had stolen gold jewellery from Srilakshmi Jewellers in Buguda town posing as a customer on 16th May 2022.

Today, when she again showed up at the jewellery shop, the staff identified her on the CCTV and informed the police. Soon the cops reached the spot and apprehended her.

Later, the police raided Banita’s house and recovered stolen gold jewellery including two necklaces, four bangles one ring, and one earring, all estimated to be worth around Rs 4.5 lakh and Rs 15,000 cash.

A case 339/22 has been registered against the accused and forwarded to the court today.

India Vs South Africa: Rain Stops Play With India 2 Down In Series Decider

BJP Hits Out At Opposition Over Politicisation Of Agnipath Scheme