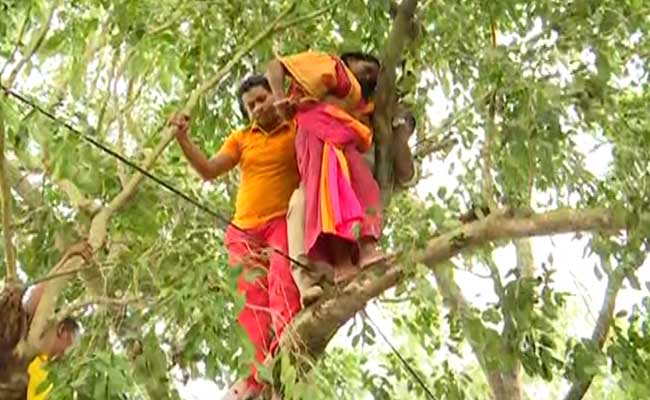 Bhubaneswar: A woman attempted suicide by climbing atop a tree at a high sensitive security zone near Naveen Niwas for allegedly being harassed by police and other administrative officials for last 23 years.

Her bid to end life was foiled due to timely and prompt action of security forces and fire service personnel.

After being rescued, the woman, hailing from Bhadrak came down on police and other officials. Asked about her action, she said “Why should I live?”

She alleged that some youths had allegedly attempted to assault her sexually 23 years ago at her village in Basudevpur of Bhadrak. Her brother had rescued her from their clutches for which he had to sacrifice his life as the miscreants had murdered him brutally.

Since the incident, she had run from pillar to post for justice, but to no avail, she alleged.

The woman had moved to police station several times. But, cops had taken the matter casually, she said. The woman had also lodged complaint in CM’s grievance cell several times seeking justice. But no one came to her rescue, she rued.

On the other hand, she and her family were harassed by the miscreants.

She wanted to meet the Chief Minister today, but police didn’t allow her to do so, she said. The police action forced her to take such step, she said.