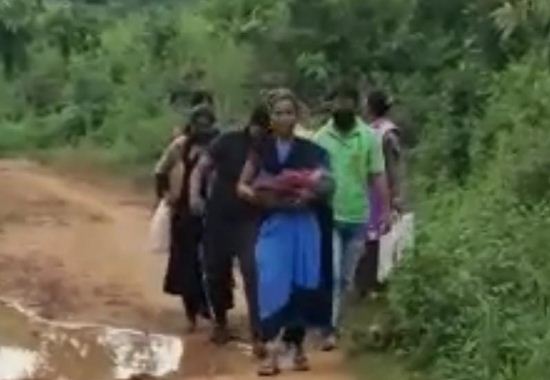 Woman Carried On Stretcher Due To Lack Of Road, Gives Birth Midway

Kandhamal: A pregnant woman, who was being carried on a stretcher to an ambulance, delivered a baby on the roadside at Ladangi village under Bhramarbadi panchayat in Kandhamal district on Wednesday.

According to reports, the woman, Banita Pradhan, wife of Mrutunjay Pradhan was pregnant and experienced labour pain this morning. Following this, her family members contacted the ambulance. However, the ambulance driver expressed his inability to reach the village due to poor road connectivity.

With no option left, the family member along with the ambulance worker carried Banita on the stretcher when she gave birth to a child.

Later, the mother and newborn child were shifted to the Daringbadi Community health centre.