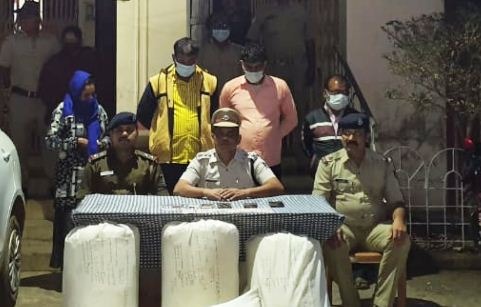 Woman Among Four Held For Ganja Smuggling In Sundergarh

Sundergarh: Four persons, including a woman, have been arrested while over 67 Kgs of ganja has been seized at Town police limits in Sundergarh district, cops said today.

Acting on a tip-off, police intercepted the vehicle bearing registration HR-51AW-9557 and apprehended four accused including a woman, while they were en route to Mathura (Uttar Pradesh) from Jharsuguda through Sundergarh town. The cops also seized 67.1kg of Contrabands packed in four gunny bags, cash amounting to Rs 15, 830, four mobile phones, and a car which was being used in smuggling.

Later, the cannabis were seized in presence of the Executive Magistrate as per the provisions of search and seizure under the NDPS Act.

A case has been registered under relevant sections of the IPC and the accused persons have been forwarded to court.