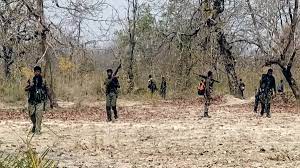 Wife of missing commando urges govt to get back husband, IG says search on

Raipur: Search is on to find out the missing commando following gunfight with Naxals, Inspector General of Police in Bastar Range of Chhattisgarh, P Sundarraj, said.

The fierce gun battle had left at least 22 security personnel killed in Bijapur district in Chhattisgarh. Naxals had claimed that they have also abducted Commando Rakeshwar Singh Minhas during the deadly ambush on Saturday.

Meanwhile, the wife of the missing commando said that it is the duty of the government to ensure that her husband returns home safely. She told reporters none of the officers gave her a clear picture on the matter.

Meenu, the wife of the missing commando, said that her husband joined the CRPF in 2011 and has been serving the nation for the past 10 years.

Health Minister To Review COVID Situation With Heads Of 11 States