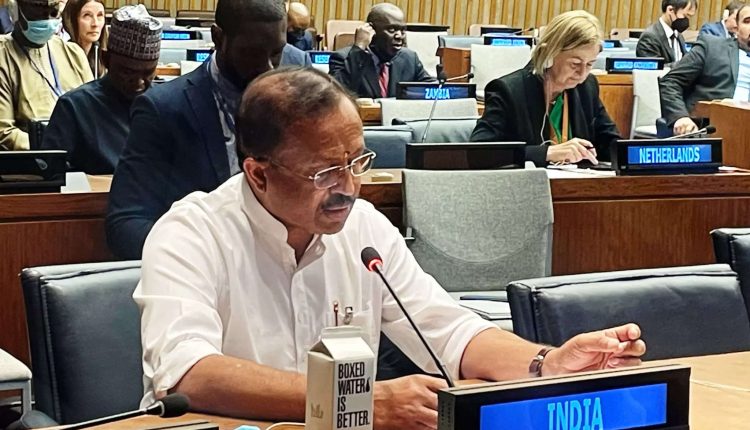 Wheat Shouldn’t Go the Way of COVID Vaccines: India Calls Out West on Exports At UN

New Delhi: India on Wednesday expressed its concerns over hoarding of food grains leading to unjustified increase in food prices in the world. It also said that the food grains should not go the way of Covid vaccines for which poor countries struggled even for initial doses while rich nations had enough.

Speaking at the ministerial meeting on ‘Global Food Security Call to Action’ chaired by US Secretary of State Antony Blinken, Minister of State for External Affairs V Muraleedharan on Wednesday said that a number of low income societies were confronted with the twin challenges of rising costs and difficulty in access to food grains.

Even those like India, he said, that have adequate stocks, have seen an unjustified increase in food prices. “It is clear that hoarding and speculation is at work. We cannot allow this to pass unchallenged,” the minister said.

Russia’s war in Ukraine has triggered food grain shortages triggering price rise across the world. Earlier, India had said that it can feed the world. However, last week, India restricted the export of wheat saying the decision will control food prices, strengthen the food security of the country and countries facing a deficit.

The minister said the Indian government has recognised the sudden spike in global prices of wheat which put its food security and those of its neighbours and other vulnerable countries at risk. “We are committed to ensuring that such adverse impact on food security is effectively mitigated and the vulnerable cushioned against sudden changes in the global market. In order to manage our own overall food security and support the needs of neighbouring and other vulnerable developing countries, we have announced some measures regarding wheat exports on 13 May 2022,” he said.

“Let me make it clear that these measures allow for export on the basis of approvals to those countries which are required to meet their food security demands. This will be done on the request from the concerned governments. Such a policy will ensure that we will truly respond to those who are most in need,” he said.

India also cautioned the West that the issue of food grains should not go the way of Covid vaccines, which were procured by the rich nations in large quantities while less developed nations scrambled to administer even the initial doses. The minister said it was necessary for all to adequately appreciate the importance of equity, affordability and accessibility when it comes to food grains. “We have already seen to our great cost how these principles were disregarded in the case of Covid-19 vaccines. Open markets must not become an argument to perpetuate inequity and promote discrimination,” he said.