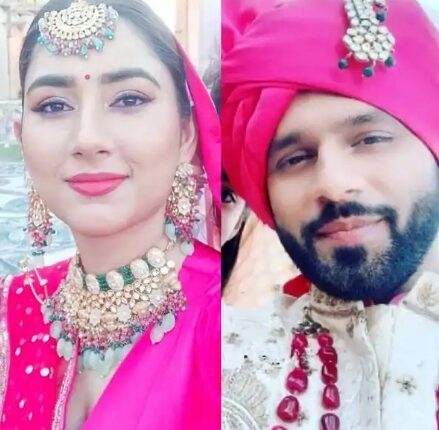 Mumbai: Bigg Boss 14 first runner-up Rahul Vaidya and his lady love Disha Parmar grabbed the eyeballs as they dressed as a groom and a bride.

Many speculations about their wedding have been doing rounds on internet, ever since Disha Parmar and Rahul Vaidya bought their relationship to the limelight. And now, pictures of the couple dressed up as a groom and a bride are all over the internet which have left fans surprised.

However, these viral pictures on social media are from their upcoming romantic music video. The photos are making their fans lose their hearts, just like their every PDA or romantic clips on social media.

Rahul first created headlines on the show when he proposed to Disha Parmar publicly on the national television. The actress had even entered the house in the Valentine’s week where she accepted Rahul Vaidya’s marriage proposal.