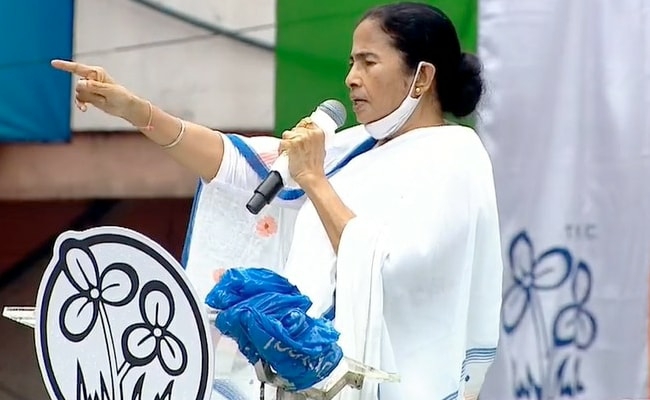 Kolkata: West Bengal Chief Minister Mamata Banerjee today urged the people to turn 2024 into a “rejection election” to unseat the BJP at the Centre. “Break the shackles of the BJP and its monumental incompetence. Install a pro-people government,” she told the crowd in Kolkata, at a Martyrs’ Day organised by her party Trinamool Congress. She claimed the BJP will not get Lok Sabha majority in 2024.

Ms Banerjee punctuated her speech with some drama on stage. At one point, she held up some muri (puffed rice) – a traditional snack — to make a point against the recent levying of Goods and Services Tax on essentials that weren’t in the GST net earlier. A large cutout of a gas cylinder made an appearance, too.

Ms Banerjee was speaking at the party’s Martyrs’ Day rally, an otherwise annual event that couldn’t be held the last two years due to the Covid pandemic. It’s more significant as it is the first after the party came to power for a third consecutive term last year.

“Fuel prices have also gone up,” she said, this time getting an LPG cylinder on stage. She slammed the Centre over privatisation of banks and accused the BJP of using the Agnipath defence recruitment scheme “to train its own cadres”.

Referring to the BJP’s return to power in Maharashtra after Uddhay Thackeray’s government fell to a coup, she said, “They think, now that they’ve broken Mumbai, they will break Chhattisgarh and then Bengal. I warn them. Don’t come here. There is a huge Royal Bengal Tiger here.”

She accused the central government of holding up funds to the state.

July 21 is marked as Shahid Diwas or “martyrs’ day” to commemorate the day in 1993 when, during the Left government, 13 people were killed as the Kolkata Police fired at a Youth Congress protest led by Mamata Banerjee. She was the chief of the West Bengal Youth Congress at the time. While she left the Congress later in the 1990s, she and her party continue to claim the legacy.