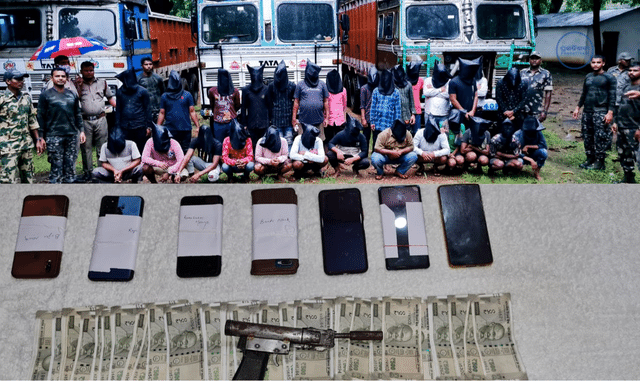 Sambalpur: In Intensifying probe into the loot of 550 water supply pipes from a stockyard at Amlipani village on July 16, police have arrested 26 looters, and 2 buyers and seized one Bolero car, three trucks, one pistol, and Rs 40, 000 from their possession.

Jujumura Police Station has registered case no (105/2022) under Section 395 of the IPC and 25 of the Arms Act in this regard. On the written report of the M. Siddheswaran (51) of Tamilnadu A/p- Sr. Project Manager, KEC- Kaveri Joint venture the case was registered.

According to the case brief, the Company KEC International Ltd is executing a Rural Pipe water supply project for Rairakhol constituency in Sambalpur district. They are storing DI and HDPE pipes at Amlipani stockyard located at Jujumura. On the intervening night of 15th and 16th July 2022, about 25-30 armed miscreants entered the stockyard premises in two trucks and one Mahindra Bolero vehicle. They threatened the security guards, and hydra operator, tied them with ropes and locked them all inside the store room. They looted 550 numbers of 100 mm( diameter) DI pipes each length 5.5 meters and fled away. The total cost of stolen pipes will be about 36 lakhs, the police said.

The fact of the case is that, KEC and Kaveri are Mumbai-based company and deals with the construction of bridges, pipeline work over the country.  Vide contract agreement No- EIC/RWSS-13/2021-22 dt-4.3.2022 both the company have taken the contract of execution of pipeline water supply work in Rairakhol constituency. It is under RWSS Scheme, State of Odisha. It includes 4 blocks, 42 GP and 381 villages. For the purpose the company has started construction of intake well at Dhama, behind HumaShiba temple. They have selected stockyard for storing the pipes for work at Gunderpur, Dhama(near veterinary office) and Amlipani, Jujumura. The pipes are made of caste iron called Doctile Iron Pipes (DI). It is of different sizes. Since the last 3 months, they have started storing DI pipes at Jujumura. They are procuring the Tata Metallic pipes from Calcutta and Electro steel casting pipes from Andhra Pradesh and Calcutta. The brand of Andhra Pradesh is Shree pipes and from Kolkata, it is Electro pipes. The total cost of the project is about 370 cores.

Modus Operandi: The dacoits headed by Raju alias Rajkishore Naik of Cuttack Banki, move around and locate pipes which are lying on the roadside. Thereafter they arrange vehicles, and team members and chalk out plans to commit the theft of pipes. The accused Raju Naik used to dispose of the pipes at Calcutta.

Day of Operation: Before 2/3 days the accused Raju Naik, Banty Naik, Basudev Naik and Sonu had come to Sambalpur’s side in the search of iron pipes for theft. They located the stockyard at Amlipani village on NH-55, Near Jitu Dhaba and planned to commit theft as it was in an isolated and dark place.

Raju Naik made contact with his team members and at the Kolkata party for disposal, and accordingly Calcutta party send trucks to Raju. On the 14th July 2022 the accused persons consisting of 19 members came from village- Jatamunda, Banki in a Pickup vehicle and reached at Rairakhol area in night with trucks.  But due to heavy rain they failed to commit dacoity. For which they waited near Jujumura on 15.7.2022 day time and according to plan on 15.7.2022 night at about 11.30 PM they entered into the stockyards located at Amlipani, threatened on the point of pistol and tied the security guards and another hydra operator locked them in the store room and made away with about 550 pieces of 100 mm diameter, 5.5 meters DI pipes in two trucks.

A case was instituted at Jujumura PS and during course of investigation, scientific team and dog squad was utilized while local and boarder MO criminals were properly verified. As per the direction of SP Sambalpur a special squad was formed investigation started.

Sambalpur district technical team and cyber cell expert collected information, and inputs from spies, and the accused persons were identified and traced to Banki, Cuttack area. However, as the criminal team was large and professionally sound they managed to evade arrest. At last, spies communicated valuable information that they are planning to commit a similar type of offence at Sambalpur area.

They were properly interrogated and after getting information from the accused person a team proceeded to Howrah and arrested two receivers from PSPC lane by-pass, Bantra, Howrah while recovering some pieces of stolen pipes. It was ascertained that the receiver have already sold the pipes to another party and police is trying to recover those. An account has been frozen with a total amount of Rs 56,59,350.

Name and address of accused Drivers:-

Name of the receivers:-

The accused persons Raju @ Rajkishore Naik, Banty Naik, Sonu @ Dharmananda Sahu and others are involved in the following cases-

The accused persons have committed theft of 32 numbers of DI Pipe of 250 diamete from near village- Kustalla village, Begunia Dist- Khurda and 30 numbers of DI pipes of 250 mm diameter from Biridia village PS- Bansda Dist- Bhadrak. Further verification is going on about their involvement in other districts.

Another 988 COVID-19 patients recover in Odisha