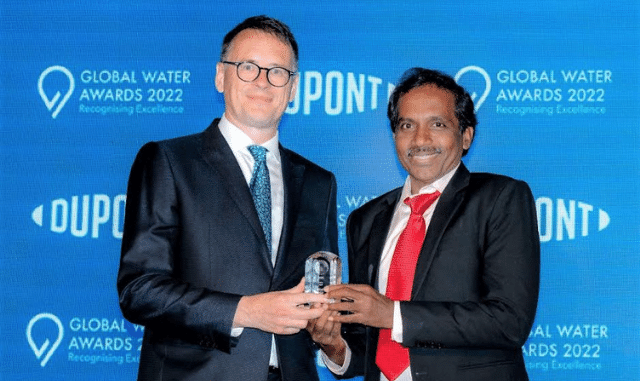 Bhubaneswar: Water Corporation of Odisha (WATCO) has received the prestigious ‘Distinction of Global Water Leader Award, 2022’ in the Global Water Summit held on 17th May, 2022 in Madrid, Spain.

The Global Water Intelligence (GWI) announced the awards at the Global Water Summit 2022 Award Ceremony which recognizes the industry’s greatest achievements made in the year 2021.

The Global Award has been presented to Odisha for the achievements made in providing 24×7 Drink from Tap quality water supply in the state and for accomplishing 100% house connections in the urban areas under WATCO. The Award was received by Shri G. MathiVathanan, Principal Secretary, Housing & Urban Development Department, Government of Odisha-cum-Chairperson, WATCO.

@OdishaWatco has received the prestigious ‘Distinction of Global Water Leader Award, 2022’ in the Global Water Summit held on 17th May, 2022 in Madrid, Spain. 1/6 pic.twitter.com/QNg3chUvDH

“We recognize the pioneers and innovators who have been pushing the industry to greater heights. The awardees represent outstanding quality and exceptional achievement,” said the organizers.

It rewards initiatives and companies in the water, wastewater and desalination sectors that are moving the industry forward through improved operating performance, innovative technology adoption and sustainable financial models.

“WATCO again has been recognized at global stage for its excellence in 24×7 water supply to urban citizens and its Drink from Tap Mission, which already received a number of national and international accolades and became a replicable model across the country” said Er. Pradipta Kumar Swain, Chief Executive Officer, WATCO.

This year WATCO got shortlisted with 3 other agencies Beijing Drainage Group, China, Lusaka Water Supply and Sanitation Company, Zambia and Sedapar, Peru for the Award.

The award was established in 2006 by Global Water Intelligence,and presented at the Global Water Summit, the major business conference for the water industry worldwide.

Congratulations @OdishaWatco on receiving the Distinction of Global Water Leader Award, 2022 at the Global Water Summit held in Madrid, Spain. It has been awarded for providing 24×7 #DrinkFromTap supply in #Odisha & for achieving 100% house connections in urban areas.#OdishaLeads pic.twitter.com/PsBnrpfQm7