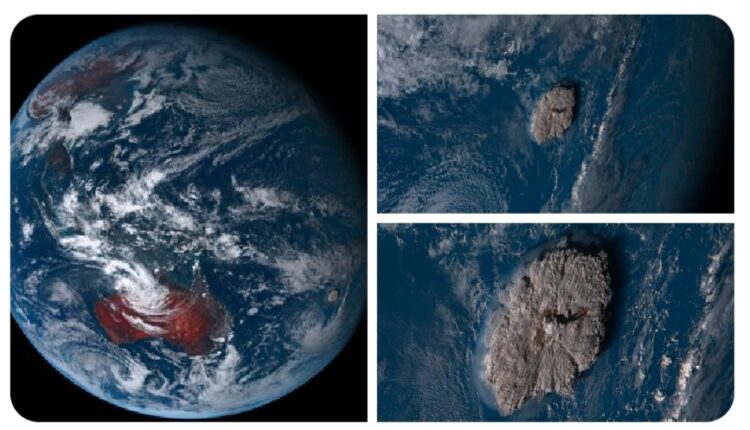 The blast of the Hunga Tonga Hunga Ha’apai volcano created a plume of ash, steam and gas mushrooming above the Pacific Ocean, with a quickly expanding shockwave visible from orbit. Japan’s Himawari-8 weather satellite recorded this dramatic video:

Each frame in this video is less than 10 minutes long, so the plume expanded quickly. Some experts estimated the shockwave expanded at an amazing 800 – 950 kph (500-600 mph.)

This series of images captures the first 1 hour of today's #HungaTongaHungaHaapai eruption, as seen by #GOES17's high res VIS channel. Note that "up" in these images is west pic.twitter.com/JcxfTvO0Jc

The second image is from *before* the latest, massive eruption.

Both images were acquired from orbit by @planet. pic.twitter.com/hzbxUeVt7H

Wow this is terrifying, the type of sonic boom you hope you never hear. That is a staggering pressure spike. [NSFW language]

Truly incredible imagery from the Himawari meso sector of multiple shockwaves from a volcanic eruption on Tonga propagating through what was recently subtropical storm Cody. My back of the napkin math estimates put the shockwave speed somewhere in the vicinity of 500-600 mph. pic.twitter.com/lDyNXFpLbE

Two Killed, One Critical In Road Mishap In Kalahandi