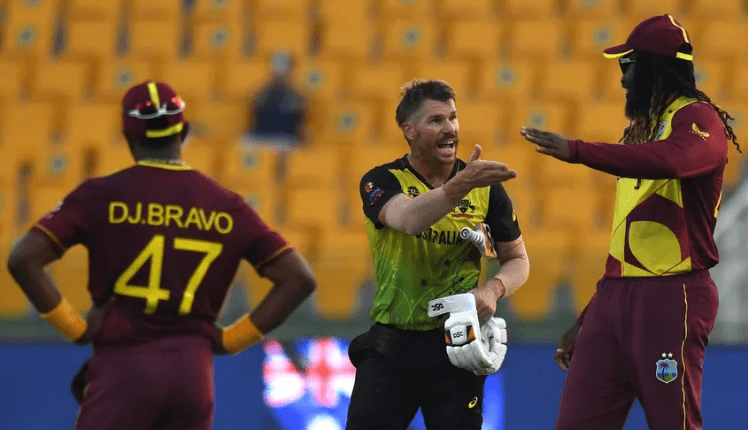 Dubai: David Warner and Mitchell Marsh guided Australia to a routine victory over the West Indies to leave them on the verge of reaching the ICC Men’s T20 World Cup 2021 semi-finals.

Warner and Marsh’s terrific partnership of 123 took the game away from the West Indies with the Australian opener hitting form at a crucial time with his second half-century of the tournament, making an unbeaten 89 from only 56 balls.

Marsh departed with only one more needed to win for a splendid 53 but, barring a huge win for South Africa over England later, Australia will compete in the last four.

Earlier, Josh Hazlewood took four wickets as the West Indies posted 157 for seven thanks to Kieron Pollard’s 44 and Andre Russell’s late maximums but it proved to not be enough with Warner firmly in the mood.

After being put in to bat, the West Indies openers Evin Lewis and Chris Gayle went berserk in the second over, taking Hazlewood for 20 runs.

Gayle’s entertaining cameo of 15 from nine balls, including two sixes, was ended when he chopped on against Mitchell Starc, the 42-year-old raised his bat on his way off the ground suggesting it may have been his last innings for the West Indies.

Hazlewood swung the momentum firmly back Australia’s way in the fourth over, taking two wickets in three balls.

The dangerous Nicholas Pooran was caught at cover for four and then Roston Chase’s stumps were rearranged by a nip-backer before he had troubled the scorers.

Shimron Hetmyer, fresh from his unbeaten 81 in a losing cause against Sri Lanka, joined Lewis and together they brought up the West Indies’ half-century by the end of the powerplay.

The pair’s promising partnership of 35 was ended by leg-spinner Adam Zampa as Steve Smith held on to a steepler to send Lewis back to the hutch for 29 off 26 balls as the West Indies made it to 74 for four.

Captain Kieron Pollard was given a reprieve on three when Zampa could not cling on to a caught and bowled chance.

But Hetmyer was not so lucky, gloving a rising Hazlewood delivery behind to Matthew Wade, having to depart for a patient 27 off 28 balls to leave West Indies struggling at 91 for five.

The West Indies brought up their 100 from the first ball of the 16th over before Dwayne Bravo, in his last T20I innings, smoked a six over extra cover to try and inject some much-needed impetus.

Skipper Pollard then came to the party, blasting 13 runs off Pat Cummins to leave his side on 123 for five with three to go.

Hazlewood’s remarkable recovery from his expensive first over continued when Bravo became his fourth victim, but Pollard was undeterred, finding the boundary twice more.

He eventually went for 44 off 31 balls when he skied one to Glenn Maxwell in Mitchell Starc’s final over.

But Andre Russell had the last say, blasting two sixes off the last two balls to leave Australia needing 158 to win.

Captain Aaron Finch and Warner got the chase off to a perfect start, putting on 33 in 21 balls.

Finch went for nine when he was bowled by Akeal Hosein but Warner was the aggressor and did not relent when joined by Mitchell Marsh, Australia finishing the powerplay on 53 for one.

Warner grabbed the game by the scruff of the neck with some belligerent hitting and brought up a terrific half-century off just 29 balls to put Australia firmly in the driving seat.

The West Indies struggled to bowl a consistent line and were picked off easily by Warner and Marsh, Hosein let one through his legs for four off Russell which just about summed things up for Pollard’s men.

At 98 for one at the halfway mark, Australia were cruising needing exactly a run a ball to finish the job and put them on the cusp of the semi-finals.

West Indies tried to halt Australia’s serene progress with a barrage of slower balls, but they could not stop Marsh from bringing up a fantastic first World Cup fifty off only 28 balls and with it the pair’s century stand.

Warner unceremoniously ushered Bravo into retirement with some sublime shot-making, an audacious reverse sweep for four followed by a huge six over square leg coming from the West Indian’s final over.

The game ended in strange fashion with Gayle brought on to bowl his part-time off-spin in a cap, seemingly confirming he would also be retiring after the game.

However, the veteran was not to be denied a wicket as Marsh, 53 from 32 balls, tamely chipped one straight to Jason Holder at mid-off with the scores level.

That ended a sensational match-winning partnership, but Warner got the job done with a boundary as Australia won with 22 balls to spare before forming a guard of honour for the retiring West Indies legends.