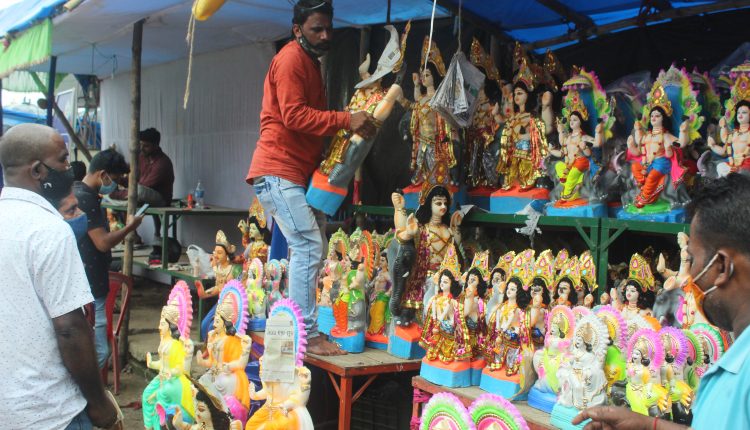 Bhubaneswar: Lord Vishwakarma, the son of Brahma, the chief architect of the world, is a divine craftsman who designed Dwarka, which is now submerged in the Arabian Sea and Maya Sabha for the Pandavas.  The ancient cities of Indraprastha, Hastinapur, and Lanka were designed by him. Another popular folklore related to him is that he sculpted the Jagannath Puri idols. He is also attributed to have designed and built several weapons for Gods like  Shiva’s Trishul, Vishnu’s Sudarshan Chakra, Ravana’s Pushpak Viman, and Indra’s  Vajra (thunderbolt).

While the god of architecture is worshipped all over India, it has always been a very popular festival in Odisha. In places like Paradeep, Rourkela, Cuttack, Hirakud, Nalco Nagar at Angul and other industrial sites, it is a major festival with a lot of religious customs and traditions that last for a full week. For the locals, it is not an occasion to be missed at any cost as it is marked with many other celebrations and programs. Gigantic gates, illuminated pandals, and huge tableaus are seen in the industrial townships. Workers worship the mustachioed Lord Vishwakarma to increase their efficiency and productivity in the fields and factories on the occasion which is followed by two days of merriment and revelry.

Due to the corona virus pandemic, this year, too, Vishwakarma Puja celebrations are likely to remain subdued. The authorities have made it clear that the puja will have to be conducted indoors only for observance of rituals without the participation of the public. Besides, the size of idols shall be less than four feet and there would be no use of a public address system. Even the immersion procession has been prohibited. This, coupled with the order of the Power Distribution companies asking consumers not to pay any donation for the puja and to report of any such amount is collected has put a dampener on the celebrations.

In the idol centre of the Old Town of Bhubaneswar, the forlorn artisans await customers with the small-sized idols. There are hardly any takers and community pujas are not being allowed. The dwarf-sized idols mounted on Lilliputian elephants are a far cry from the grand idols that were worshiped when good times prevailed. The Idol makers have, therefore, been left high and dry. “Every year, I used to get orders to make anything between 200 to 250 Vishwakarma idols. But this year I have got orders for only 20 idols, that too only small ones of two to three feet which are hardly worth the efforts” said Krushna Maharana. Many government institutions have asked the workers to perform the rituals in front of a photo. The restrictions on idols have been imposed to do away with immersion, which leads to crowding.

A Report by Anil Dhir

Businessman Shot Dead In Kandhamal, Accused On The Run