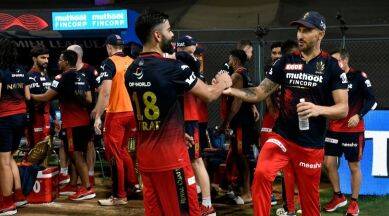 Mumbai: After a disappointing campaign, Virat Kohli roared back to form when it mattered the most for Royal Challengers Bangalore (RCB).

The former RCB captain smashed 73 off 54 balls as RCB chased down a stiff 169-run target set by Gujarat Titans (GT) in 18.4 overs and kept themselves alive in the Indian Premier League (IPL) 2022 play-offs race.

They are now placed fourth on the points table with 16 points. Kohli stitched a 115- run stand with Faf du Plessis for the opening wicket before the RCB captain was dismissed by Rashid Khan on 44(38). The spinner then went to inflict another blow in the form of Kohli before Maxwell wrapped up the proceedings with an unbeaten 40 off 18 balls.

Earlier, Hardik Pandya led the side from front and smashed an unbeaten 62(47) as GT piled 168/5 after opting to bat first. Apart from Pandya, Rashid chipped in with a 6-ball 19, while David Miller scored 34(25). Josh Hazlewood scalped two wickets from the RCB camp, while Wanindu Hasaranga and Maxwell picked a wicket each.