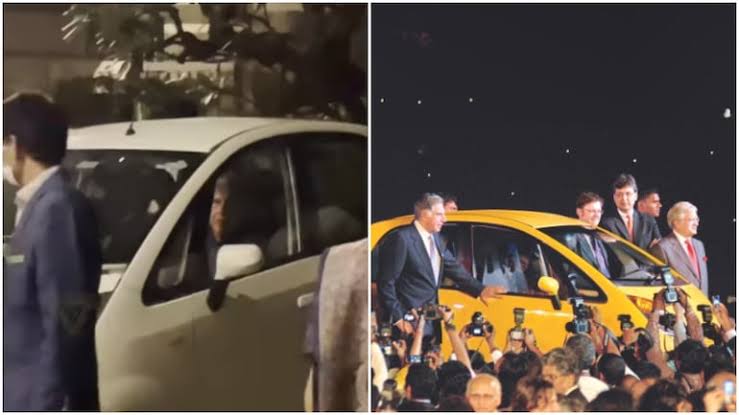 Mumbai: Ratan Tata, the Tata Trusts Chairman has won the Internet over by arriving at a hotel in Mumbai in a Tata Nano.

In a viral video shared on Instagram, Ratan Tata is arriving at the Taj Hotel in the car. The grace and simplicity of the industrialist has impressed social media users.

Replying to the post, several people have expressed their respect and admiration for Ratan Tata. For instance, a user said, “So simple and humble.”

Just a few days ago, Ratan Tata penned a note about what Tata Nano means to him. In a poignant and detailed caption, he said that the car was always “meant for all our people”.

Sharing an image from the launch of the car, Ratan Tata wrote, “What really motivated me, and sparked a desire to produce such a vehicle, was constantly seeing Indian families on scooters, maybe the child sandwiched between the mother and father, riding to wherever they were going, often on slippery roads. One of the benefits of being in the School of Architecture, it had taught me to doodle when I was free. At first, we were trying to figure out how to make two-wheelers safer, the doodles became four wheels, no windows, no doors, just a basic dune buggy. But I finally decided it should be a car. The Nano was always meant for all our people.”

Wheat Shouldn’t Go the Way of COVID Vaccines: India Calls Out West on Exports At UN