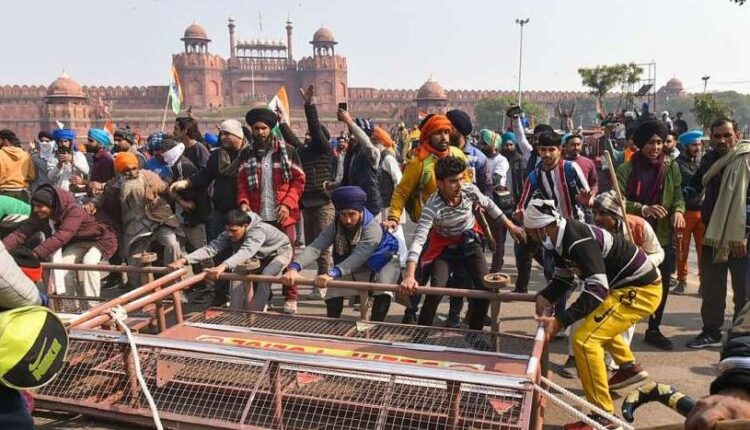 New Delhi: The Delhi Police on Wednesday said that as many as twenty-two FIRs have been registered so far in connection with violence during farmers’ tractor parade on Tuesday.

After two months of peaceful protests on Delhi’s borders and 11 rounds of negotiations with the Central government, the farmers had planned the tractor rally on the Republic Day on Tuesday.

During this, New Delhi witnessed violent scenes as farmers participating in a tractor rally clashed with the police, broke barricades and stormed the Red Fort, and the police responded with tear gases and lathi charge.

While one protester died after his tractor overturned while ramming a road barrier at ITO, scores were injured, among them at least 150 police personnel, as mobs resorted to violence and vandalism while forcing their way in, around the time the Republic Day parade was underway on Rajpath.

The farmer body strongly condemned the incidents and called off the tractor rally with immediate effect while maintaining that the movement will continue peacefully.

Breaking
NCPCR Notice To NGOs Over Use Of Children In Fund Raising Malnutrition And Stunting In Odisha Can Be Contained: Chief Secy Man Gets 20 Years In Jail For Raping Minor In Mayurbhanj NCMC reviews preparedness for possible cyclonic storm over Bay of Bengal Divyang minor girl gang raped in Keonjhar, 2 including minor held Warmer Night Ahead In Odisha Due To Cyclone Over Bay Of Bengal Melinda French Gates Calls On President Droupadi Murmu Seven Fraudsters Held For Mortgaging Fake Gold In Sonepur Bank After Shraddha's Murder, Aftab Watched Johnny Depp-Amber Heard Case Trial Live For Over 100 Hrs If I Open Up, State Scenario Will Change: Archana Nag
Sign in
Sign in