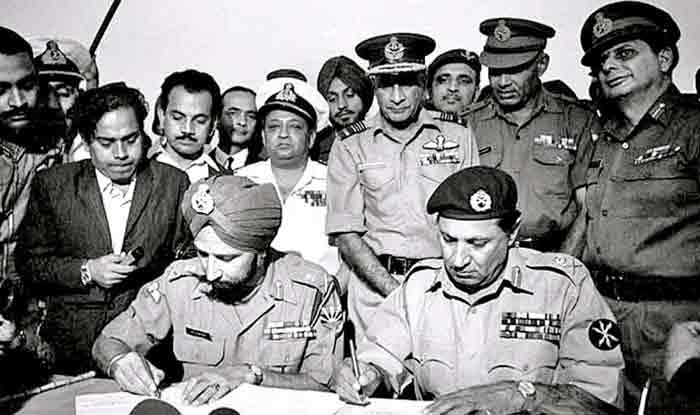 New Delhi: India celebrates Vijay Diwas on December 16 to commemorate its victory over Pakistan in the 1971 war, which led to the creation of Bangladesh. On this day, Indians pay homage to the brave soldiers of our country. The defining moments in the history of the subcontinent also established the prowess of the Indian Armed Forces including the Army, Air Force and Navy. Vijay Diwas 2021 marks the 51th anniversary celebrations of India’s victory over Pakistan in 1971.

On December 3, the Indo-Pakistan war began in 1971 and lasted for 13 days. Officially, the war ended on December 16 and Pakistan surrendered to India. The thirteen-day war resulted in the complete surrender of Pakistani forces and the creation of Bangladesh. Army of Pakistan surrendered before India with around 93,000 soldiers. It was the “Greatest Ever Victory” and India rose as a regional power to reckon with.

The conflict was a result of the Bangladesh Liberation War following West Pakistan’s ill-treatment of the people and undermining of the election results in East Pakistan. On March 26, 1971, the call for succession was officially raised by East Pakistan. India’s former Prime Minister Indira Gandhi supported them in their independence struggle.

The 1971 war was a military conflict between India and Pakistan. It started with pre-emptive airstrikes on 11 Indian Air Force stations by Pakistan on December 3, 1971. As a result, the Indian Army agreed to support Bengali nationalist groups in the Bangladesh independence struggle in East Pakistan.

The war was fought due to the widespread genocide of the people of East Pakistan carried out by an oppressive military regime under General Yahya Khan of Pakistan.

The war was fought on both Eastern and Western fronts and was short and intense.

On December 4, 1971, Operation Trident was launched by India. In this operation, the Indian Navy’s Western Naval Command successfully conducted a surprise attack on Karachi port. It was done under the codename Trident.

In East Pakistan, the Mukti Bahini guerrillas joined hands with Indian forces to fight against Pakistani troops in the east.

During the war, the Southern Command defended the borders of the nation against any action by Pakistan. The battles that were fought in the area of responsibility of the Southern Army consists of the famous battles of Longewala and Parbat Ali. Here, Pakistan’s armoured forces were destroyed by resolute Indian troops.

Soldiers of the renowned 10 Para Commando Battalion led by Lieutenant Colonel (later Brigadier) Bhawani Singh carried out a raid on the Pakistani town of Chachro. These battles have created an example in history and show the grit, determination, and bravery of our soldiers.

On December 14, the IAF attacked a house where a meeting was taking place with the governor of East Pakistan. Pakistan was shaken by this attack. As a result, the surrender process started on 16 December 1971 and around 93,000 Pakistani forces had surrendered at that time.

Thus, on December 16, 1971, Bangladesh was born as a new nation and East Pakistan became independent from Pakistan.

This war is considered a historical war for India. That is why December 16 is celebrated as ‘Vijay Diwas’ to commemorate India’s victory over Pakistan across the country. It is said that in the war of 1971, about 3,900 Indian soldiers were martyred and about 9,851 were injured.