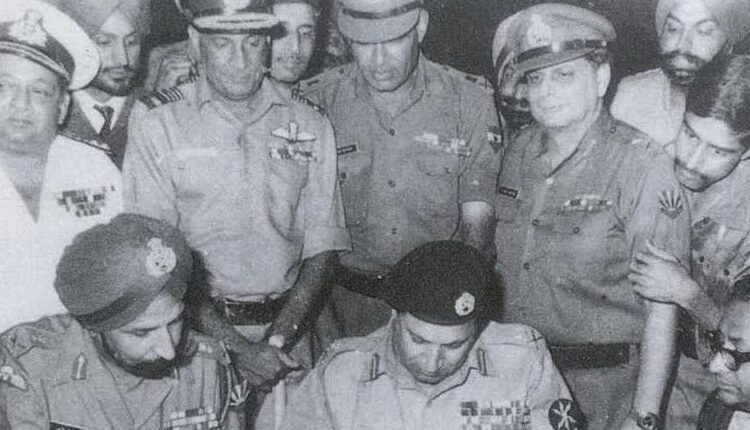 Vijay Diwas: Know About The 1971 Indo-Pak War And The Birth of Bangladesh

New Delhi: Each year, December 16 is celebrated as ‘Vijay Diwas’ to commemorate India’s victory over Pakistan in 1971.

On December 16, 1971, the chief of the Pakistani forces, General Amir Abdullah Khan Niazi, along with 93,000 troops, surrendered to the allied forces consisting of the Indian Army and the Mukti Bahini in Dhaka after their crushing defeat in the war. The day is also observed in Bangladesh as Bijoy Dibos that marks the country’s formal independence from Pakistan.

The 13-day Indo-Pak War was sparked by the rebellion in erstwhile East Pakistan against the government in Islamabad. Since March 1971, Bengali nationalists had been fighting a brutal crackdown by Pakistani forces on the civil and political rights of the Bengali population.

Then Indian Prime Minister Indira Gandhi had provided support to the Bangladesh cause for months but the Indian military formally engaged in a full-scale war with Pakistan on December 3.

The Indian military’s stellar victories on land, sea and air crushed all hopes for Pakistan to maintain any control over its territory in the east. Soon, foreign pressure to end the war and mounting losses forced Islamabad to accept defeat, thereby granting Bangladesh full independence.

The end of the war also resulted in the unilateral and unconditional surrender of the Pakistan Army and subsequent secession of East Pakistan into Bangladesh.

While it was a big day for Bangladesh, as it meant the secession of East Pakistan into the country, this win was also a proud moment for the Indian Army. It was, after all, the first war after World War II that we had won conclusively. This day is also commemorated in Bangladesh as Bijoy Dibos

On 16 December every year, Citizens, senior officials, students & war veterans lay wreaths and remember the sacrifices of the soldiers. The anniversary of Vijay Divas is observed across India by paying tributes to the Indian martyrs who laid down their lives for liberating Bangladesh from Pakistan.

The anniversary of Vijay Diwas is observed across India by paying tributes to the martyrs who laid down their lives for the nation. In the national capital New Delhi, top political leaders and heads of all three wings of the Indian Armed Forces pay homage at the Amar Jawan Jyoti at India Gate.

In view of the COVID-19 health protocols, not many events have been scheduled this year. Low key ceremonies to pay homage to martyrs and online events will be organised to mark the 49th anniversary of Vijay Diwas.