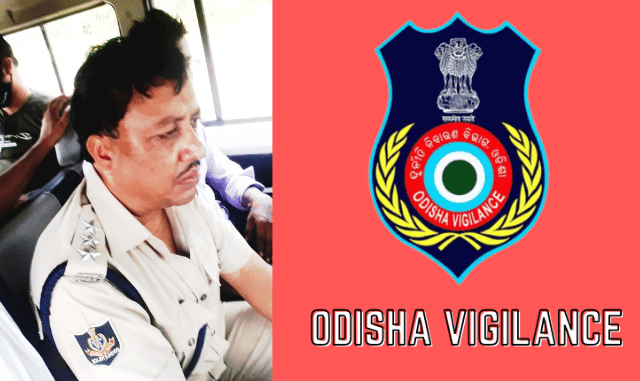 Dhenkanal: The Odisha Vigilance on Wednesday carried out simultaneous raids at the properties associated with Malaya Nayak, Sub-Divisional Police Officer (SDPO) of Hindol in Dhenkanal district after he was caught red-handed while taking bribe.

“It is suspected that accused SDPO Nayak was collecting bribes from many people locally through cash as well as through electronic means such as ATM deposits, PhonePe, GooglePay etc., which are under verification. A team comprising Cyber Cell and Banking Consultant of Odisha Vigilance are examining the financial transactions, the Vigilance said, in a press note.

“Details of investments and deposits made in banks, insurance, other schemes are being verified. Vigilance Technical Wing is carrying out detailed measurements and assessments of the buildings, the Vigilance said.

Soon after detection of the case, Rita Mahapatra, wife of accused Nayak managed to escape from the residential Govt. quarter at Hindol, on a two-wheeler which was being driven by an unknown person, with one briefcase and one carry bag. The locked quarter was kept under guard and is now being searched in presence of an Executive Magistrate. Effort is on to trace Smt Rita Mahapatra and examine her in the case, the Vigilance added.

According to reports, the accused SDPO of Hindol, Malaya Nayak had demanded a bribe of Rs 30,000 from a stone quarry owner to facilitate stone quarrying and transportation.

The Vigilance sleuths today laid a trap and caught Nayak red-handed while taking the gratification and recovered the bribe money from his possession.

In this connection Cuttack Vigilance, PS Case No (34/22) U/S 7 PC Amendment Act.2018 has been registered. Further investigation is underway in this regard.