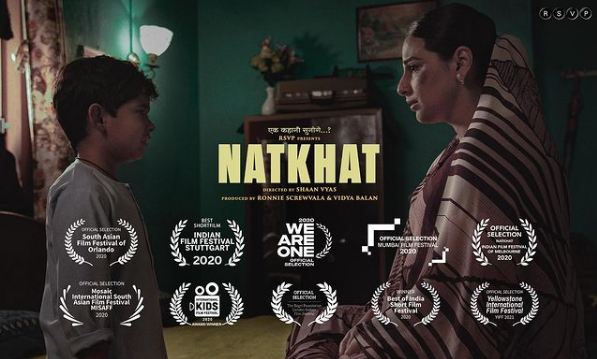 The film, which stars Vidya Balan alongside child artiste Sanika Patel, marked her debut as a producer. Natkhat is directed by Shaan Vyas, known for producing films like Masaan and Zubaan, and co-produced by Ronnie Screwvala.

Eyeing on a big feat with an Oscar, the short-movie takes on the delicate subject of gender-equality as shown in the scene running around a gruesome thought.

Sharing the news about the film’s selection in the Oscars race, Vidya Balan wrote: “So so so thrilled that our film #NATKHAT is in the race for the #OSCARS2021 after a 2020 filled with prestigious international film festivals.” In a separate post, she shared a snippet from the short film, which shows a mother (Vidya) teaching her son (Sanika Patel) lessons about patriarchy and the value of gender quality through bedtime stories.

Helmed by Shaan Vyas and written by Annukampa Harsh and Vyas, the movie was premiered on YouTube as part of the ‘We Are One: A Global Film Festival’. The Ronnie Screwvala produced film came out on June 2, 2020.

US will confront China: Biden