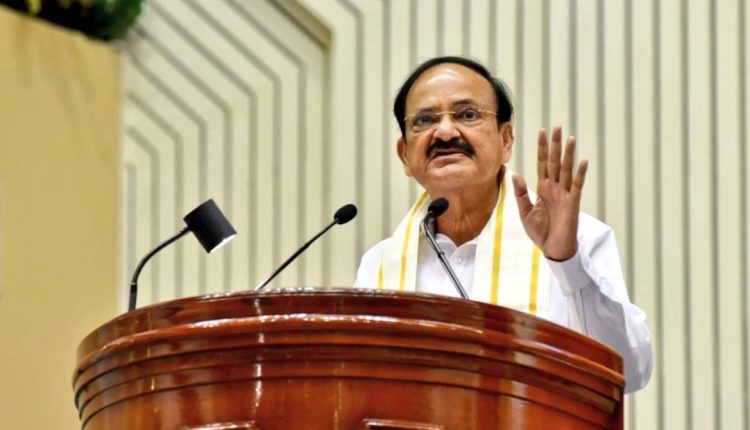 New Delhi: Vice President, M. Venkaiah Naidu today emphasised that “a progressive, modern India must have a police force which meets the democratic aspirations of the people” and called for a renewed thrust to implementing reforms in the police forces.

Addressing a gathering after releasing the book titled “The Struggle for Police Reforms in India” written by former IPS officer, Prakash Singh, the Vice President stressed the need to upgrade the skills of our policemen to effectively tackle 21st century crimes such as cybercrimes and economic offences which require special investigative expertise due to their sophisticated and often transboundary nature.

The Vice President specifically highlighted issues that need to be addressed on a war footing, including filling up of the huge number of vacancies in police departments and strengthening the police infrastructure in tune with the requirements of modern age policing. He called for particularly strengthening the police force at the grassroots, who are the first responders in most cases. Shri Naidu also wanted the housing facilities of police personnel to be improved.

Stressing that the behaviour of policemen towards the common man should be courteous and friendly, the Vice President called upon the senior police officers to lead by example in this regard. “A visit to a police station should be a hassle-free experience for a person who goes there seeking help. The first thing to reform for this is the attitude of the police – they must be open-minded, sensitive and receptive to each individual citizen’s concerns”, he further said.

Noting that police reforms is a highly important and sensitive subject, the Vice President said that although there have been various attempts at introducing reforms over the years, progress has not been made to the desired extent. He called for a political will in the states to properly implement the reforms, according to the Supreme Court guidelines.

Naidu also reiterated the need for police reforms to uphold law and order in the country and to sustain India’s economic growth. “Peace is the prerequisite for progress”, he said.

Recalling the history of policing in India, the Vice President said that after the revolt of 1857, the British created a police force with the prime aim of upholding their imperial interests, and during the freedom struggle, used the police to mainly suppress and oppress our freedom fighters and revolutionaries. “After independence, sweeping reforms were needed in policing. Unfortunately, we have lagged behind in this crucial area,” he said.

Naidu said that over the years following Independence, the police force was perceived to be increasingly politicised with significant erosion in values and practices. Instead of being seen as a people-friendly force, it was seen as being elitist and power-friendly, he observed.

Referring to the instances of misuse of police force during the infamous Emergency, Shri Naidu said it was used with impunity to suppress human rights and imprison thousands of people, including all the political opponents of the ruling dispensation. Subsequently, a National Police Commission was set up in 1977, which submitted reports with detailed multi-dimensional proposals for police reforms, he recalled.

However, the Vice President noted that not much headway has been made in bringing reforms in our police forces at the individual and institutional level.

Taking note of disappointment over the non-implementation of Supreme Court’s directions on Police Reforms of 2006, Shri Naidu said that policing is a state subject and it is the states that have to lead this drive towards police reforms. “I hope all the states and the Centre would come together in the true spirit of ‘Team India’ to implement the much-needed police reforms in the country,” he said.

Naidu expressed happiness over a number of initiatives taken by the Government of India toward better policing, including a project to decriminalize minor offences and violations and the move for amending the Identification of the Prisoners Act, 1920, a legislation that was passed more than a 100 years ago. He also appreciated the Prime Minister’s call for making the police a SMART force—standing for a force which is Strict and Sensitive, Modern and Mobile, Alert and Accountable, Reliable and Responsive, Tech-savvy and Trained.

Underlining the importance of policing to maintain peace and order in society, Shri Naidu commended the Government for giving high priority to greater use of technology in the day-to-day working of police. He also praised the Indian Police Foundation for its efforts to realise the vision of a SMART Indian Police, especially by bringing internal reforms, technology adaptation, digital transformation and training to improve the professional and ethical standards of the police.

Calling for reforms in all walks of public life, including politics, legislatures and judiciary, Naidu stressed the need for speedy disposal of criminal cases against politicians and civil servants to retain people’s trust in the system. He also called for reforms in the anti-defection law to discourage unethical defections among elected representatives.

On this occasion, Naidu also paid homage to the policemen who laid their lives in the line of duty battling criminals, terrorists, extremists and all shades of lawless elements in different parts of the country.

Not Fadnavis, Eknath Shinde To Be New Maharashtra CM