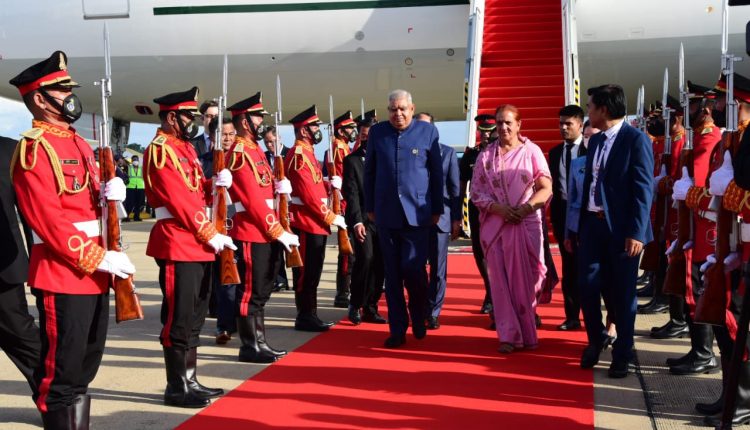 New Delhi: In his first-ever foreign visit, the Vice President, Jagdeep Dhankhar arrived in Cambodia today where he was welcomed by Chea Vandeth, Minister of Post and Telecommunications, Cambodia and other dignitaries at Phnom Penh airport.

The Vice President is scheduled to attend a host of events during his three-day tour, including the ASEAN India Commemorative Summit and the 17th East Asia Summit.

On the first day of the visit, Jagdeep Dhankhar and Dr. Sudesh Dhankhar attended a reception today evening organised in their honour by the Indian community and friends of India in Cambodia.

Addressing the gathering, the Vice President called it a special occasion as India and Cambodia are commemorating 70 years of diplomatic relations, and also the 30th anniversary of India-ASEAN relations with India-ASEAN friendship year.

Emphasising the deep cultural and historical ties between the two countries, Dhankhar said, “Cambodians look at India as the revered land of Lord Buddha, just as we think of Cambodia as our civilizational sister and extended family.”

Referring to the magnificent temples of Angkor Wat, Ta-Prohm and Preah Vihear, he said that these awe-aspiring monuments are a sublime reflection of the linkages between our two countries. Highlighting India’s strong association with restoration and preservation works of the world-famous Angkor Wat temple, he expressed happiness over the continuation of such preservation work for other ancient temples such as Ta Prohm temple and the ancient Preah Vihear temple.

Describing the development partnership and capacity-building as the key components of our engagements with Cambodia, the Vice President termed Cambodia as an important interlocutor and partner in our ‘Act East’ policy and the ASEAN.

Praising the contributions of Indians the world over, Dhankhar expressed happiness over the fact that the members of the Indian Diaspora have made a name for themselves in Cambodia.

Calling the Indian Diaspora a living bridge, the Vice President said that it can play a very important role in connecting their adopted land with the motherland. He termed India as the land of opportunities and asked all Indians living abroad to be part of the India growth story.

Prior to the community reception, Dhankhar witnessed performances by local and Indian artists. He also viewed the exhibition of paintings of the ASEAN-India Artists Group at Chakto Mukh Conference Hall in Phnom Penh.