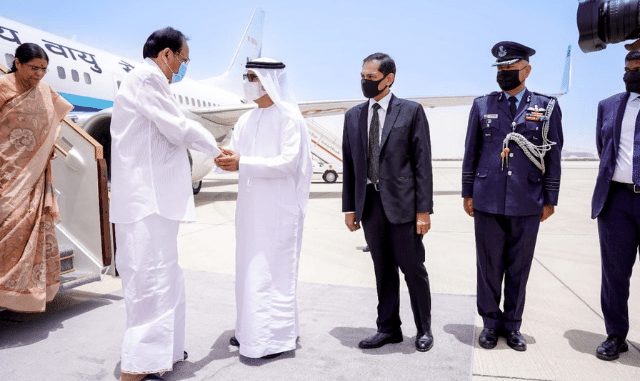 Vice President Shri M. Venkaiah Naidu visited the UAE on 15 May 2022 to offer condolences on behalf of the Government of India to the UAE leadership on the sad demise of His Highness Sheikh Khalifa Bin Zayed Al Nahyan, former President of the UAE and Ruler of Abu Dhabi.

Vice President on landing in Abu Dhabi at noon today went straight to Mushrif Palace and offered his condolences to His Highness Sheikh Mohamed bin Zayed Al Nahyan, newly-elected President of the UAE, the royal family and the entire leadership of the UAE.

Vice President conveyed the condolences of President Shri Ram Nath Kovind and Prime Minister Shri Narendra Modi and reiterated that India and its people stand by the UAE at this difficult time.

Vice President fondly recalled that under the leadership of HH Sheikh Khalifa Bin Zayed Al Nahyan, India-UAE ties prospered greatly to the mutual benefit of the people of the two countries and also that Sheikh Khalifa took exceptional care of the large Indian community in UAE, who held him in the high esteem.

Earlier, External Affairs Minister Dr. S. Jaishankar visited the UAE Embassy in New Delhi on 14 May 2022 to convey India’s condolences. India has also observed a day of national mourning on 14 May 2022.

Vice President also conveyed his best wishes to His Highness Sheikh Mohamed on being elected as the third President of the UAE. Vice President said that under his care and leadership, the two countries will continue to take forward their historic and comprehensive strategic relationship in new and diverse areas.

Vice President was accompanied by Ambassador of India to the UAE, Secretary to the Vice President, Joint Secretary (Gulf) and other senior officials of Government of India.