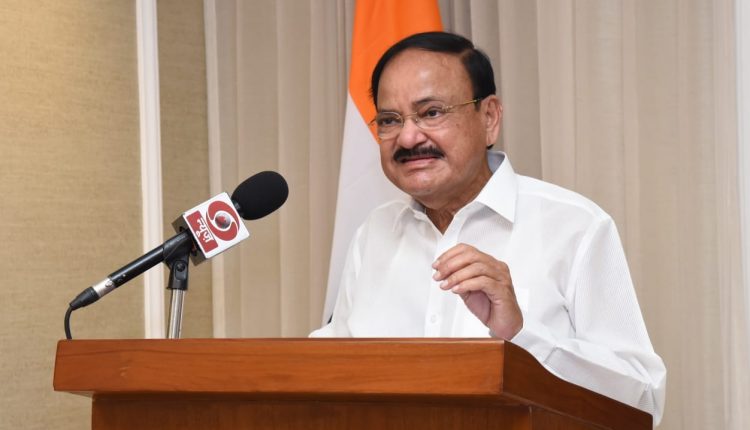 New Delhi: Vice President M. Venkaiah Naidu today termed the Covid-19 pandemic as the most serious challenge that has faced humanity in living memory and wanted the Indian strategic and academic community to focus on the world after Covid and its implications for India.

Addressing the meetings, Naidu noted with satisfaction that the analysis of the global impact of the pandemic has been a cross-cutting theme at ICWA in all its deliberations and areas of research.

The Vice President expressed appreciation for ICWA’s activities through the past year notwithstanding the disruptions of the pandemic. It may be noted that in the past seven months, apart from its research activities, ICWA organized a total of 28 events which were a mix of conferences, panel discussions, lectures, track-II dialogues and book discussions. Shri Naidu was happy that apart from its traditional focus on area studies in its programme activities, the ICWA has made recent efforts to also focus on broad themes such as Gandhiji and the World, maritime affairs, advancing reformed multilateralism, Gender within International Relations and Diplomacy, and contribution of Indian soldiers in the First World War. He noted that the Council had made full use of digital platforms during the pandemic which has provided opportunities for expanding its outreach.

The Vice President noted with satisfaction that ICWA has continued its efforts to address issues that are at the top of the foreign policy agenda and to make its dialogues, discussions and research outputs more policy effective. He was happy to note that there has been continued high-level participation of MEA in ICWA’s programmes and both continue to work closely on issues such as maritime affairs, India-Pacific Oceans Initiative, Indian Ocean Rim Association (IORA), India’s non-permanent member of the UN Security Council 2021-22, Shanghai Cooperation Organization, Pakistan, Afghanistan, Nepal, India-Japan-Russia Cooperation in the Far East.

He welcomed the decisions of the concerned ICWA Committees to set up a Shanghai Cooperation Organization (SCO) Study Centre and a Council for Security Cooperation in the Asia-Pacific (CSCAP) Coordination Centre within the Council to give an impetus to ICWA’s work related to these multilateral fora. The Vice President also welcomed efforts envisaged in the direction of professional management of ICWA’s book publication programme which is an important area of its activity aimed at supporting academics, practitioners and upcoming scholars in the field of international relations.

On this occasion, the Vice President also launched the book titled “Sapru House: A Story of Institutions Building in World Affairs” authored by Dr. TCA Raghavan, DG, ICWA and Dr. Vivek Mishra, Research Fellow at ICWA. He congratulated the authors who have provided a history of the ICWA, the country’s oldest foreign policy think tank, and a glimpse of how the serious study of international affairs and debate on foreign policy began in India fostered by a consciously non-partisan institution building process of the ICWA. The Vice President also welcomed the decision of the concerned ICWA Committees to set up an ‘ICWA Archives Unit’ to properly catalogue and conserve historical and archival record found in the process of writing this book.

In response to his call for ICWA to undertake research and specialized work in world affairs aimed at the lay reader, the Vice President was happy to note that ICWA has commissioned a short monograph on India’s bilateral relations with Bangladesh written in simple language and without any technicalities. He stated that similar monographs may also be taken up for other countries.

Former Secretary (East), Ministry of External Affairs, Ms Vijay Thakur Singh was appointed as the next Director General of the ICWA at the meeting as the term of Dr. TCA Raghavan will come to an end on 23 July 2021. The ICWA Act of 2001 read with the Amendment Act of 2003 prescribes a three-year term for the DG and ex-officio Member Secretary of ICWA and the procedure for the appointment of the new DG.