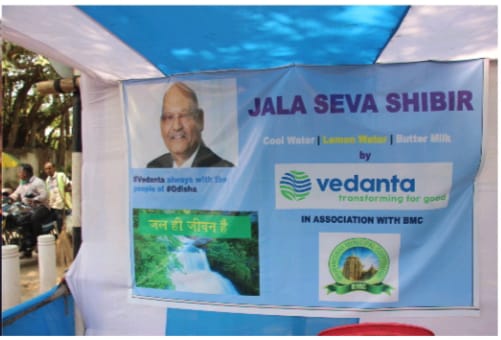 Vedanta Sets Up Jal Seva Shibiras At 15 Places In Bhubaneswar

Bhubaneswar: In a time when the state capital- Bhubaneswar is in the grip of severe heatwave conditions & temperature has gone above 42 degrees C, there is a dire need for cold water, lemon water & buttermilk for people moving on the road particularly poor, to get relief from the heat & protection from sunstroke.

Vedanta in association with Bhubaneswar Municipal Corporation (BMC) has set up Jal Seva Shibira at 15 important locations of Bhubaneswar identified by the civic body. These kiosks will provide cool water, lemon water & buttermilk from 9 am to 5 pm till Mid of June 2022. The kiosks will be operated by two NGOs – Automahasang and Deesha. Biogram, an all-women startup is front leading the NGOs for the work.

On 30.04.22, the ceremonial opening of all kiosks was done by Ms. Sulochana Das, Mayor Bhubaneswar in the presence of Dr. Tapan Chand, Former CMD of NALCO, and Present President of Vedanta, known for his good CSR projects in steel, coal & Aluminium sector.

Ms. Sulochana Das, Mayor of Bhubaneswar Municipal Corporation thanked Vedanta for taking such a beneficial project in time. She also stated that birds & animals are also facing the heat & we should take care of them. She also advocated for planting of trees to augment greenery & rainfall.

Some eminent personalities of Odisha attended the ceremony & also inaugurated other outlets. While inaugurating Jal Seva Shibira near Governor House, Odia Superstar Sabyasachi Mishra told that Vedanta is a friend in need of the people of Odisha.

Padmavibhushan Shri Sudarshan Sahoo and Padmashree Prabhakar Maharana inaugurated Jal Seva Shibira at Vanivihar chowk and Nayapalli respectively and told that Vedanta Aluminium works for the good of the state.

Padmashree Aruna Mohanty opened the Jal Sivir at Mastercanteen and thanked Vedanta for coming to help poor people on the streets in this high temperature and heatwave.

Many resident welfare associations, citizens associations, and groups have praised the initiative of Vedanta at the State level providing relief in scorching summer as a welcome change and noble job.