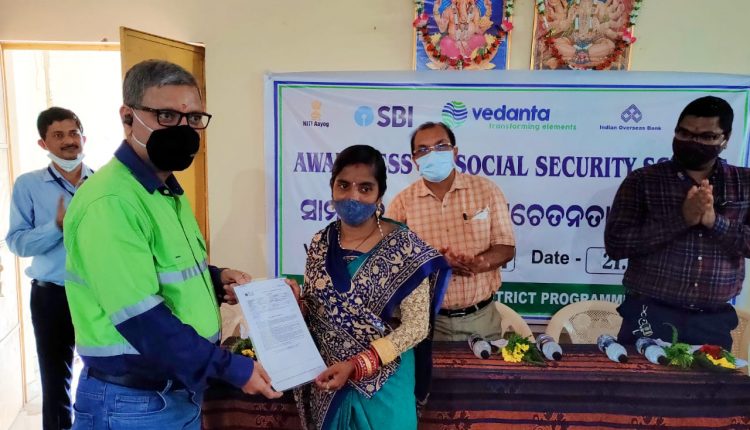 Kalahandi: Vedanta Limited, Lanjigarh, India’s premier producer of metallurgical grade alumina, is working towards inclusion of underprivileged sections of the society in Social Security Schemes by the Government of India, under NITI Aayog’s Aspirational Districts Program. With the objective of sensitizing communities living in remote areas on schemes like Pradhan Mantri Jeevan Jyoti Bima Yojana (PMJJBY) and Pradhan Mantri Suraksha Bima Yojana (PMSBY), Vedanta has been conducting awareness sessions on the benefits of utilizing these schemes.

Vedanta has organized the community welfare programme in Bengaon and Lanjigarh gram panchayats, in collaboration with the State Bank of India (SBI) and the Indian Overseas Bank, with over 120 participants attending the sessions. The bank officials interacted with community members, distributed insurance certificates and provided information on the do’s and don’ts of insurance coverage. 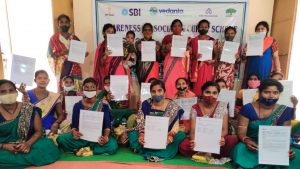 The attendees were also urged to spread the word so as to maximise the number of people who can avail such schemes. Through the company’s efforts, over 600 people arecurrently enrolled under both the schemes which makes them eligible to avail a Life Insurance cover and an Accident Insurance cover of INR 2,00,000 each.The company aims to enrol 2000 beneficiaries in these schemes by the end of financial year 2022.

Speaking about this initiative, Mr. GG Pal, Dy. CEO – Alumina Business, Vedanta Ltd., said,“Our community development initiatives are aimed at improving the quality of life of our local communities. There are many welfare schemes and programmes that have been rolled out by the central and state government for the benefit of unprivileged sections of the society. However, limited access to information keeps them from availing the benefits therewith.With our initiative, we aim to create avenues for dialogue between communities and banks, with the ultimate objective of ensuring their inclusion in these welfare schemes.”

Ms. Sukanti Majhi, Sarpanch, Bengaon Gram Panchayat and Mr. BB Satpathy, Assistant Block Development Officer – Lanjigarh, were also present at the sessions. Sumita Chandan, a resident of Rajapada village in Lanjigarh, who has been enrolled under both schemes adds, “Earlier, we were not aware that such Social Security Schemes are in place for us. Thanks to Vedanta, I now know that my children will be taken care of financially, in case anything were to happen to me. This makes me feel secured. I wholeheartedly thank the Vedanta-NITI Aayog team, for this initiative.”

Under the NITI Aayog Aspirational Districts Program, Vedanta is working in the realms of Health & Nutrition, Education, Agriculture & Water Resources, Financial Inclusion & Skill Development, and Basic Infrastructure to drive tangible outcome in the standard of living of Lanjigarh residents.Vedanta’s social interventions in the domains of sustainable livelihood, women empowerment, health, quality education, water and sanitation, bio-investment and community infrastructure reach out to about 60 villages in Lanjigarh and nearby areas, benefiting about a lakh people in a year. It empowers more than 3000 women from 305 self-help groups (SHGs), provides healthcare services to about 60,000 people annually, gives educational support to more than 2800 students, has planted more than 5.4 lakh trees in the community, and built 500 plus infrastructural projects at a community level.

Vedanta is the largest producer of aluminium in India and remains the premier manufacturer of metallurgical grade alumina. The company operates a 2 MTPA (million tonnes per annum) capacity alumina refinery in Lanjigarh (Kalahandi district, Odisha), India since 2007 and an associated 90 MW captive power plant. With its world-class Aluminium Smelters, Alumina Refinery and Power Plants in India, the company fulfils its mission of spurring emerging applications of aluminium as the ‘Metal of the Future’ for a greener tomorrow.