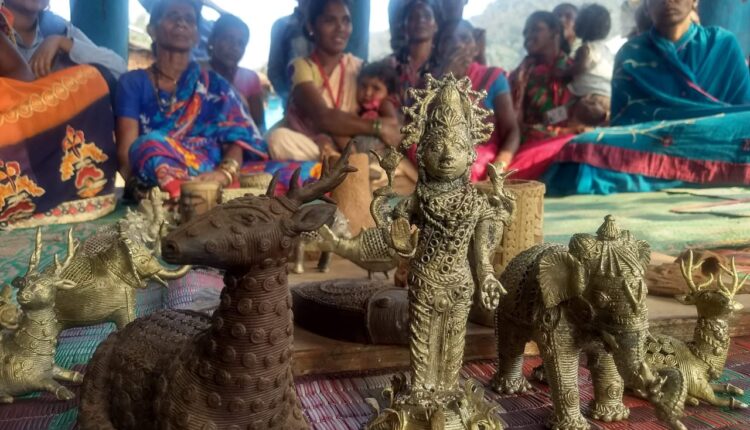 Bhubaneswar: On World Art Day, Vedanta Aluminium, India’s largest producer of aluminium, strengthens its support to local artisan communities in and around its operations in Odisha and Chhattisgarh. Commemorating the rich cultural and artistic heritage of the country, Vedanta Aluminium recommits to creating sustainable livelihoods for artisan communities by upskilling them, helping them mainstream their art forms at national and international platforms, and avail market linkage opportunities.

Towards this, Vedanta Aluminium is working with Dhokra artisans from the Kankeri village, situated near its Alumina Refinery at Lanjigarh (Kalahandi, Odisha). Nestled deep within the forests of Kalahandi, Kankeri is home to artisans skilled in the ancient metalworking artform of Dhokra, which has been a part of India’s rich handicraft legacy for nearly 5000 years, dating back to the Indus Valley Civilization. The inter-generational skill was however limited to crafting rudimentary trinkets for personal use and for selling in the nearby village markets. However, the meagre income was not enough to sustain their families due to which artists were forced to let go of their expertise and migrate to neighbouring states to work as construction labourers.

Recognizing the potential of this village to become a vibrant hub of Dhokra, Vedanta Aluminium trained artisans to produce contemporary designs through modern techniques, provided the initial seed capital for procuring metal and raw materials, and created market linkage opportunities (through exhibitions and other relevant platforms) to sell their art pieces at a better price. This led to a movement of reverse migration, wherein looking at the success of the project in transforming the lives of few artisans, others started returning to the village to pursue their passion of Dhokra art.

Alike, in Chhattisgarh, Vedanta Aluminium paved way for self-reliance of rural women through the community development project ‘Disha’. The Bharat Aluminium Company (BALCO), Vedanta’s Chhattisgarh-based subsidiary conceived Disha project for skill development of local women, helping them form Self-Help Groups (SHG), financially empowering them and enabling them to pursue their entrepreneurial ventures. Among other trainings at the company’s Nari Shakti Kendra in village Dondro, the mural arts program has emerged as a particularly lucrative option for women willing to run micro-enterprises of their own. Mural paintings are the most expressive among Chhattisgarh’s myriad handicraft artforms, aesthetically preserving the various facets of life, tradition and cultural heritage of the state’s tribal populace. From skills training to market linkage, BALCO has continued to support these women for furthering their enterprises.

Talking about Vedanta Aluminium’s endeavours towards preserving and promoting cultural heritage and traditions, Mr. Rahul Sharma, CEO – Vedanta Aluminium said, “The richness of India’s history is evident in its myriad handicrafts and artforms. We take great pride in helping preserve and mainstream artforms like Dhokra and mural paintings, and in the process build flourishing businesses for these artists. On World Art Day, we recommit to bolstering our efforts to create more sustainable livelihoods in art & culture, enabling artisan communities to become self-empowered and self-reliant participants in the development of the country.”

The ripple impact of various community initiatives by Vedanta Aluminium are apparent:

·         In Odisha, encouraged by the fruits of its labour towards revival of Dhokra artform, the company established a raw material bank for continuous art production, provided diesel generators to support Dhokra production, opened a Self-Help Group bank account to provide adequate financial support, and educated and assisted the households to open bank accounts to save their hard-earned money and earn an interest on their deposit

·         Vedanta collaborated with the Government of Odisha for the public recognition of these artisans through ‘artisan cards’, which helped the artisans participate in government-held exhibitions, demonstrate, and commercialise their works

·         The Dhokra Art Revival project has drawn the attention of local authorities, who are now partnering the company in its endeavours to improve the quality of life of local communities by aiding infrastructure, education, agricultural practices, health and sanitation.

·         While in Chhattisgarh, under the community initiatives of BALCO, as many as 3000 women have become financially empowered in Korba. Many of them have established their own ventures in mural art.

·         Through Dhokra art and mural painting, local artisans who were earlier forced to live in abject poverty with minimal income are now earning around INR 50,000 a month.

·         Similarly, Vedanta Aluminium has patronised tribal artforms like ‘Saura’, sand art, folk theatre and many others across its operations.

Vedanta Aluminium, a business of Vedanta Limited, is India’s largest manufacturer of aluminium, producing half of India’s aluminium i.e., 1.97 million tonnes in FY21. It is a leader in value-added aluminium products that find critical applications in core industries. With its world-class aluminium smelters, alumina refinery and power plants in India, the company fulfils its mission of spurring emerging applications of aluminium as the ‘Metal of the Future’ for a greener tomorrow. www.vedantaaluminium.com

RCB getting hotter and hotter with every game, will make it to the playoffs in TATA IPL: Ravi Shastri