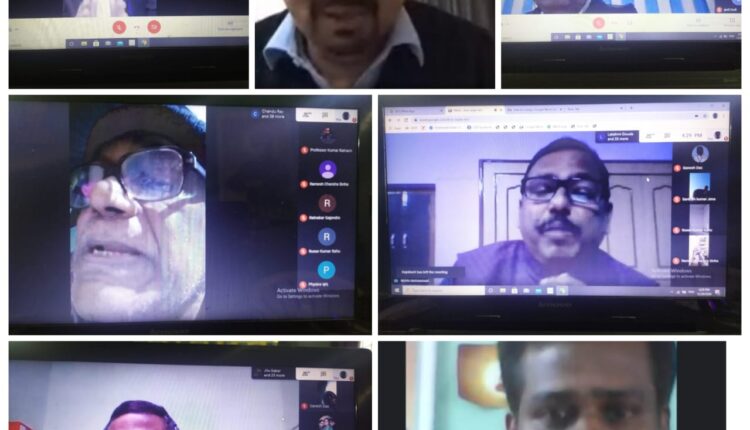 Bhubaneswar: The newly set up Philosophy Study Circle in the Department of Philosophy of Vikram Deb Autonomous College, Jeypore organised its inaugural monthly lecture on 20th December, 2020. The Indian Council of Philosophical Research (ICPR) backed forum is first of its kind amongst all the autonomous colleges across the state, where Philosophy is being taught at UG and PG levels. Conducted in virtual mode, the lecture on The New Education Policy 2020: Study and Research in Philosophy was attended by nearly fifty participants.

Inaugurating the webinar Prof Dr Gopal Halder, Principal, Vikram Deb Autonomous College delivered the welcome address. He dubbed NEP-2020 an epoch-making reforms document. He emphasised the need for holistic development of students as envisaged in the new policy. Dr Halder expressed optimism that the NEP would indeed help students cultivate a spirit of creativity, ratiocination and nurture scientific temper and humanism.
Prof R P Sinha, Chairman, ICPR was the Chief Guest at the event and through his address he laid greater emphasis on reviving the Indian culture and philosophy. He urged everyone to get rid of colonial hangover and inculcate the spirit of Indianness. He concluded his speech with a note of positivity and stated enthusiastically that the study circle would go a long way in promoting philosophical studies and research and new talents would emerge to carry forward its legacy. The Guest of Honour Prof Kumar Ratnam hailed the establishment of the study circle and underscored the sacred relationship between a preceptor and his disciples. He also brought out a fine distinction between Vidya and Shiksha, the former being ethics and values oriented whereas the latter being focused only on generating employment opportunities. He further stressed that the need of the hour is to develop global citizens with intrinsic Indian ethos and values.

The Chief Speaker Prof G P Das dwelt upon the importance of Philosophy as an academic discipline and went on to depict how philosophy encompasses a whole gamut of other branches of human knowledge and discourses. The significance of philosophy is evident from the fact that it has been reiterated many times in the NEP-2020 document. He also advocated for radical changes in pedagogy and learning process. He lauded the NEP for making provisions for fostering critical and rational thinking amongst the students as well as researchers. He also opined in favour of revisiting the prevailing systems of examination, syllabi formulation and bringing in a paradigm shift in research activities.

The other notable speakers were Prof Mohin Mohammed, Asst Professor of Philosophy, GM University, Sambalpur and Prof Patitapaban Das of Ravenshaw University, Cuttack. Both the speakers laid utmost emphasis on the multidisciplinary approach with which Philosophy needs to be studied. They viewed the NEP as a seminal document containing daunting challenges for teachers and other stakeholders. The urgency to develop a very vibrant academic atmosphere with consummate teamwork was duly acknowledged by the renowned speakers. The programme came to an end with the proposal of vote of thanks by Lt Dr Lakshman Patra, HoD Philosophy, Vikram Deb Autonomous College. Dr Patra also expressed his gratefulness to all the participants for their time and cooperation.

After appearance on Koffee With Karan Season 7, Sara Ali…