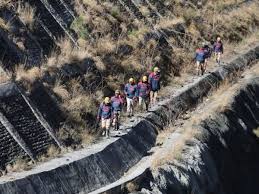 Dehradun: Motherly instincts has turned out to be a boon for the son that helped him to escape from Uttarakhand glacier burst.

Vipul Kaireni works as a heavy motor vehicle driver. His mother rang him a number of times to keep him away from the river which was rising alarmingly. The frantic telephone calls also saved the lives of 25 others also.

The man works at the NTPC hydropower project in Tapovan. At around 9 am on Sunday, Kaireni left his village to work at the project site.

Kaireni’s mother Mangshri Devi kept calling him, asking him to move away from the barrage. Devi continuously called her son after she saw the Dhauliganga river raging towards him and wanted to warn him against the tragedy.

After being alerted, the man and his co-workers took shelter on a dilapidated staircase.

Kaireni said his mother and wife Anita had seen the water rising 15 metres over its normal height and engulf everything in its wake.