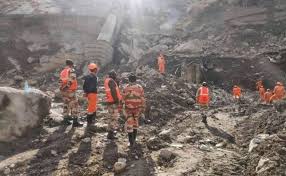 Lakhimpur Kheri: At least 29 labourers from Uttar Pradesh, who went missing when a glacier burst triggered a massive flash flood on February 7, have finally been declared “dead”.

Among the 29 missing labourers, 13 were from Ichchanagar, eight from Bhairampur and one each from neighbouring villages.

They were working at Tapovan-Vishnugad hydropower project in Uttarakhand’s Chamoli at the time of the incident.

This will bring closure for the families, who will also now receive compensation under various schemes.

On February 23, the Uttarakhand government had issued a notification authorising nearly 140 people still missing, to be declared “presumed dead”.